A Northern Territory Police officer has been caught on CCTV grabbing, shoving and verbally abusing a teenage boy in Alice Springs before threatening to “belt the f**k out” of three others.

The ABC obtained the footage after a long-fought Freedom of Information request was finally granted.

The footage comes from March 2018 when police arrested a group of Aboriginal boys aged between 12 and 16 for stealing a car and leading police on a chase in Alice Springs in the Northern Territory.

One officer can be seen twisting a boy’s arm around his back and pushing him into the counter while calling him a “cu**” and “a f**king waste of space”.

“Anybody else want to be f***ing smart? I’m right in the mood to lose my job tonight and I don’t mind losing it over belting the f*** out of one of you little c***s.”

NT Police Commissioner Jamie Chalker said it was a “snapshot of where sometimes we don’t always get it right”.

This may be the understatement of the century.

Fresh from the royal commission

This incident occurred less than six months after the royal commission into youth justice concluded.

The NT Ombudsman said the two officers involved were the subject of disciplinary proceedings but the NT Police state that they’re legally unable to say what that disciplinary action was, if any.

After declining multiple requests for an interview, NT Police Commissioner Jamie Chalker told a press conference it was a “sad reflection” to see attention drawn to the footage instead of an increase this year in rates of domestic violence.

“Anybody who views that with a level of sympathy and empathy and who’s prepared to walk in the footsteps of police who’ve been there and done that will have a greater level of understanding that, at some point in time, things just get too full,” he stated.

“It’s a sad reflection to see something that’s two and a half years [old] get the prominence that it has.” 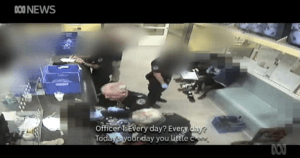 No justice for boys involved

While the internal investigation unsurprisingly has not resulted in any justice for what has occurred, due to NT laws these boys won’t be able to sue the Police for their actions either.

In every other jurisdiction in Australia, the limitation period for suing the Police is 3 years from the date of the incident. In the NT, it’s 3 months.

Three months from an incident like this you’re still dealing with the mental and physical side effects, let alone having enough time to speak to lawyers and file proceedings in the Court.

Even if these boys contacted lawyers the day after the attack, it’s hard for a matter to be properly filed in the courts within three months.

This limitation period, which targets the state with the highest percentage of First Nations people, affirms the behaviours of police officers such as those above.

O’Brien Criminal & Civil Solicitors feels disgust with the behaviour from officers in the video.  We strongly urge the NT Government to amend limitation periods so that officers can be held to account.

You can view the full footage on the ABC News website, here.