Johannes Mangurra was charged with assaulting police officers and resisting arrest after he was tasered inside Numbulwar Police station in the Northern Territory in August 2019.

Police pepper-sprayed and tasered the 24-year-old. He then bit police officers during a scuffle on the ground.

His lawyers labelled the treatment in police custody as “outrageous” and argued the force used by NT police was unnecessary. 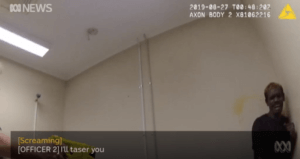 The Northern Territory Supreme Court handed down a verdict that the actions of the police officers had “escalated rather than de-escalated the situation”.

“There is a reasonable possibility that acceding to his [Mr Mangurra’s] request to speak to a lawyer before he was handcuffed and taken to the cells would have de-escalated the situation and avoided the need for force,” Justice Kelly wrote in her decision.

“I have a reasonable doubt whether the police officers were acting in the execution of their duty,” she wrote.

Attended the station to enquire about fines

Mr Mangurra arrived at the Numbulwar Police station to voluntarily enquire about fines. When he arrived, Police informed him that he was under arrest for an unrelated parole revocation order.

However, it was the Local Court in Darwin who failed to keep him in custody after the revokation of parole.

“Instead it ordered the appellant’s release, and he returned home to Numbulwar believing all outstanding matters had been finalised,” Justice Kelly in the Local Court said.

Mr Mangurra does not speak English as a first language, and he made multiple attempts to request a lawyer. He refused to be handcuffed before Police pepper-sprayed and tasered him.

He was found guilty of assaulting and resisting police in the Local Court, with the Supreme Court now overturning the findings.

“As defence counsel, we always maintained on behalf of Mr Mangurra that he was outrageously treated by police whilst in custody,” he said.

If you’ve been affected by police action within a police station, contact O’Brien Criminal & Civil Solicitors.