A woman with cerebral palsy has told the Disability Royal Commission that a paid personal assistant raped her.

The man began caring for Chloe* in 2016. During his employment, he allegedly treated her “like a dog” and beat her after she returned a positive pregnancy test.

Chloe told the Royal Commission that he threatened to kill her if she told anyone about the abuse. 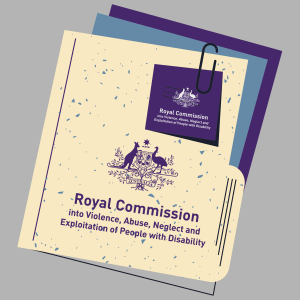 Chloe, who uses a wheelchair, said the man beat her from “head to foot”. He allegedly kicked her in the belly “over and over again”, which killed the unborn child and almost killed her.

“He had his bad face for me and his good face for everyone else,” she said in a statement.

Counsel Assisting the Commission, Kate Eastman SC, read the statement at hearings on Monday in Hobart.

“He treated me like a dog. There were so many rapes and physical assaults. It was awful.

“I tried to fight back by scratching him, so he would cut my nails.”

She said the man once threw her dinner on the ground and told her to eat it off the floor after she flung a mug at his head. Chloe said he then raped her after she refused to eat the food.

Chloe said the man used her bank card “all the time” to buy things for himself. Additionally, he also used her phone, taking it home with him so she couldn’t call anyone.

“He kept me from seeing friends and family. He would charm everyone,” she said.

She went on to say, “He threatened to kill me if I told anyone what had happened. And I thought I was going to die.”

The Commission heard that the man was charged with multiple counts of rape, grievous bodily harm, torture, and assault. However, he was ultimately found not guilty at trial.

“(The jury) saw me as disabled and a liar. (They) think you are making this all up and telling lies,” Chloe said.

“I can’t trust anyone anymore. It’s been about six years of hell. I’m scared to be in my own house.”

Almost half of all women with a disability experience physical violence

The Commission heard that almost half of all women with a disability will experience physical violence during their lives.

According to the figures, 48 per cent will experience physical violence. This is much higher than the rate for women without disability, at 27 per cent.

Ex husband sets up environment of abuse for disability advocate

Disability advocate Nicole Lee survived 10 years of sexual, emotional and financial abuse committed by her ex-husband. He was also her carer.

Ms Lee said her husband, who the commission heard went to jail for several years, used the police against her. To this end, he would call them and position her as the “crazy wife”.

In conclusion, “The disability sector, the mental health sector and the family violence sector are all completely and utterly siloed. There is no cross sector collaboration happening within this country,” Nicole said.

We can also pursue compensation for those who suffered neglect, abuse and assaults by disability providers or carers. Contact us today for a free, confidential consultation.