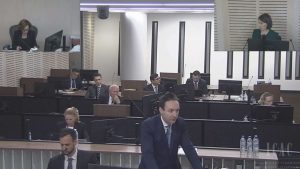 NSW Premier Gladys Berejiklian has told the Independent Commission Against Corruption (ICAC) that she has been in a “close personal relationship” with disgraced MP Daryl Maguire.

The investigation of whether Member for Wagga Wagga Mr Maguire used his position for personal.

Berejiklian told the inquiry that she has a close personal relationship with Mr Maguire from 2015 to a few months ago.

“When I was asked to support this inquiry it became apparent to me that I should have absolutely no contact anymore and I ceased all contact,” Ms Berejiklian told the inquiry.

Berejiklian has denied any wrongdoing and emphasised her allegiance to public service.

“I would never ever compromise my ability to put the people of this state first,” Berejiklian told the commission.

“I will always direct them to the front door, not the back door.”

The commission played a phone call between Mr Maguire and Ms Berejiklian, where Mr Maguire told Berejiklian that he may go to China to help sort an issue between Bright Foods China and UWE – a company he was attempting to get on the board of.

“We’ve got problems with the UWE and the fighting… If I get the tick off can he come to Shanghai with me to see Bright Foods… I need to go tell them to sort out their problem now,” Mr Maguire told Ms Berejiklian.

“We need more white faces there, they’ve sent all these people and they can’t get them to budge,” Maguire said.

Berejiklian doesn’t recall Maguire expressing interest of being appointed to the board of UWE.

“I don’t have a recollection, Mr Robertson,” Ms Berejiklian stated.

Berejiklian emphasised that she wasn’t aware of what UWE was.

“I had no idea what UWE meant, all I knew… is that it involved regional jobs,” she told the commission.

The issue was related to regional jobs located near Leeton – a town not then in Mr Maguire’s electorate.

In another call in 2017, Berejiklian seemed to be giving Maguire a heads up that Niall Blair would raise the issue on his behalf, however, Maguire still insisted on going to China himself to sort out the issue between Bright Foods and UWE.

“They seem to think it’s in your electorate – I didn’t say anything,” Ms Berejiklian stated to Mr Maguire during a phone call in 2017.

Berejiklian stated that she was letting Maguire know what she had heard, but wanted him to go through the due processes of getting permission to go to China.

“If you thought it was inappropriate for Mr Maguire to go to China, why didn’t you tell him in that phone call?”

Ms Berejiklian stated she thought he would go through the normal processes of seeking approval before going.

If you are facing the possibility 0f appearing before the Independent Commission Against Corruption (ICAC), contact us. We are experts in Commissions of inquiry such as Royal Commissions and ICAC. ICAC has different rules to a courtroom as far as admissibility of evidence and your right to remain silent.