Is defamation a crime in New South Wales?

We all know that you can sue someone for defamation, but could they also end up in the slammer?

Technically, it is a crime, however, it’s unlikely the person would ever be charged…

What is Criminal Defamation?

The definition of criminal defamation in the Crimes Act is: 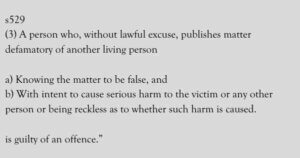 The maximum penalty for criminal defamation is 3 years imprisonment.

No charges ever finalised for criminal defamation

BOCSAR confirmed that there have not been any charges finalised under s529 since its insertion into the Crimes Act in 2005.

If NSW Police, or anyone for that matter, wants to charge you with such an offence, they require the approval of the Director of Public Prosecutions (DPP) before proceeding.

It seems the opinion of the DPP is that defamation is an issue between two individuals. But, is it that simple?

Defamation for the rich and wealthy?

Firms like ours offer no-win, no-fee arrangements when suing media companies for defamation in certain circumstances, however what about if you want to sue an individual?

Our firm has a lot of success with negotiating with other parties on matters to resolve them in a resourceful way. However, when dealing with persons who believe they are beyond reproach is another matter altogether.

Suing another person for defamation is an expensive exercise. Even if you win the case, there remains the matter of recovering costs from the other party. This pursuit can be pointless if they don’t have the assets to cover the costs.

Unfortunately, we see a few circumstances where people have been seriously defamed where negotiations with the other party prove fruitless.

For example, one young father was accused of being a paedophile by a group of male teenagers he had met once, briefly at a music festival. The young father was never accused of any offences amounting to paedophilia, they just thought the man ‘looked creepy’. These allegations were never serious and have never been raised by anyone who actually knows the man.

Through Facebook they continued to ridicule the man, torment him, stating that he’s a paedophile, creepy and bullying him in general.

The comments have caused grave distress for the young father, with friends questioning him on the posts. He has continually had to defend himself from the unsubstantiated and vexatious allegations. The young father no longer feels welcome at these events as his reputation has been forever tarnished.

It would be entirely pointless to attempt to sue the teenagers for defamation. Not only would the cost of action be completely draining the young father of money, but it’s also unlikely that the teenagers would ever be able to pay the bill of the Court costs and damages.

So what can you do? Well, under the NSW Police and DPP’s current view on criminal defamation, nothing.

To charge, or not to charge?

It is not suggested that every person liable for defamation in the civil sphere be charged with criminal defamation – for the courts would be grossly overrun with minor matters.

However, in the cases of serious defamation where the publishing parties are relentless to any form of acceptance of wrongdoing, should they not be charged with criminal defamation?

The double-edged sword could be contentious. Those making allegations, for example, of sexual assault without enough evidence in the eyes of the Courts could face a criminal defamation charge and it’s easily agreed that this may not be so fair.

At the end of the day, we ought to be wary that defamation is technically a crime…

If you require assistance with defamation, contact our defamation practice on 02 9261 4281 or