Just days before the trial was to commence, the parties dispensed with proceedings by entering into a confidential settlement.

Channel Nine have since made the following apology to Dr Hewson on their website. 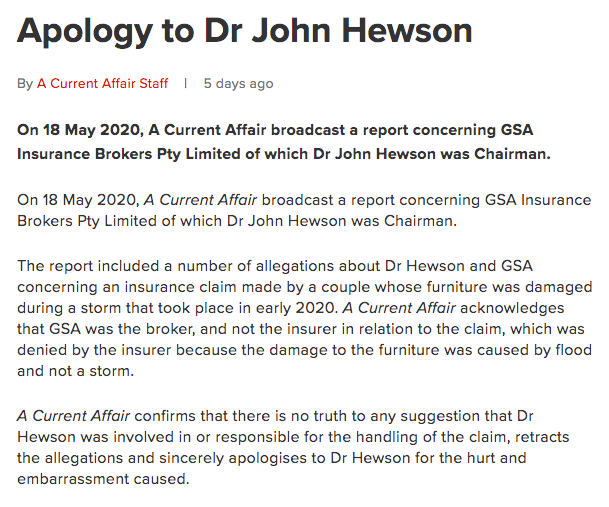 A text version of the apology is at the bottom of this page.

Solicitors for Dr Hewson filed the statement of claim in June 2020 against Channel Nine,  who is the company responsible for the masthead A Current Affair.

The claims arise from a broadcast on 18 May 2020 relating to GSA Insurance Brokers, the company Dr Hewson chaired. He is now an advisor to the board.

In the court documents, Dr Hewson alleged that A Current Affair defamed him by suggesting he “failed to direct” the insurance broking company to pay insurance claims relating to a thunderstorm that cause water damage in storage units at North Parramatta.

He alleged that ACA suggested he failed to make that direction “when he knew those claims were valid”.

In the Federal Court last year, Nine’s barrister said the “primary issue” in the case was the meanings conveyed by the broadcast.

Nine denied that they conveyed any of the six defamatory imputations pleaded by Dr Hewson’s lawyers.

Dr Hewson’s solicitors stated the aggravated damages were appropriate for a number of reasons. These included that Nine “gratuitously ran footage of a 27-year-old interview … that was completely irrelevant to the report” to discredit him.

During the episode, the Nine reporter said “at the helm of GSA [is] chairman John Hewson, the former Liberal opposition leader”, who is “no stranger to crunching numbers for A Current Affair”.

The segment then cut to a snippet of the famous interview on ACA in 1993, when the then opposition leader was asked how much a birthday cake would cost under the Liberal Party’s proposed GST legislation.

If you seek advice in relation to a defamation claim, contact our experienced defamation team on 02 9261 4281 or

By A Current Affair Staff | 5 days ago

On 18 May 2020, A Current Affair broadcast a report concerning GSA Insurance Brokers Pty Limited of which Dr John Hewson was Chairman.

The report included a number of allegations about Dr Hewson and GSA concerning an insurance claim made by a couple whose furniture was damaged during a storm that took place in early 2020. A Current Affair acknowledges that GSA was the broker, and not the insurer in relation to the claim, which was denied by the insurer because the damage to the furniture was caused by flood and not a storm.

A Current Affair confirms that there is no truth to any suggestion that Dr Hewson was involved in or responsible for the handling of the claim, retracts the allegations and sincerely apologises to Dr Hewson for the hurt and embarrassment caused.