The new recruits in outlaw motorcycle gangs (OMCGs) are more violent, criminally-inclined and less loyal. That’s according to new research from the Australian Institute of Criminology (AIC).

Younger members have a reputation of self-interest and financially motivated by their movements within the OMCG, with many former members disengaging from the OMCG for these reasons.

The history of the bikie gang 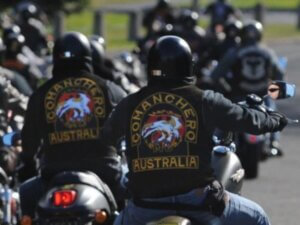 Since their emergence, OMCGs in their respective chapters or local branches are increasingly independent. They developed strip, military-inspired hierarchies and fostered ‘outlaw’ cultures involving violence, recklessness, camaraderie and loyalty.

Over three quarters of OMCG members have criminal records. However, most of the criminal activity is ‘lifestyle crime’. This includes fighting, traffic violations, drug possession and disorderly conduct.

The growing rift between senior and junior members

Older, more traditional OMCG members often seek to preserve the original outlaw values and practices of OMCGs. The young members and new members sometimes use OMCG membership to obtain status and money. Sometimes they will engage in higher-level criminal enterprises, according to the AIC.

A study in 2017 noted the emergence of “Nike Bikies”. These are younger members attracted to OMCGs for status and money rather than freedom, love of motorcycles and camaraderie (Lauchs 2017).

People wishing to join an OMCG usually spend a few months getting to know everyone as a ‘hangaround’ and then becomes a ‘nominee’ if deemed suitable. However, this can last one to two years where they undertake menial tasks around the clubhouse and follow orders. After this, members vote on whether to elevate that person to full membership.

In the research conducted by the AID, many older members expressed displeasure with the new types of members.

“Now, it’s the wrong perception, they’re joining for the wrong cause, they think it’s this, you know, they see shows on TV like Sons of Anarchy and they think it’s all like that, which it’s not. (Participant who first joined in early 1970s),” another one commented.

While members have changed, the structures are stable

The research from the AIC notes that while the demographic has changed, many of the traditional structures in place have not.

“According to former members, office-bearing positions still serve largely the same formal functions, and many rules are still in place, including those governing:

While these results do not establish a causal link between cultural changes in OMCGs and any involvement they have in organised crime, it is clear that OMCGs have come to mirror organised crime groups in some respects.

The growing instability in these clubs reflects the instability in organised crime groups. The latter often form quickly to exploit opportunities for illicit profit before dissolving as a result of police activity, competition, internal disputes or illicit market downturns (Bouchard & Morselli 2014; Morselli 2009)

Source: The changing culture of outlaw motorcycle gangs in Australia, Trends & issues in crime and criminal justice, Australian Institute of Criminology, No 615 February 2021