In 2015, Chris Pearson spiralled after his wife murdered their 11-year-old daughter before taking her own life as well. It wasn’t long before Chris was deemed unable to care for himself. This is when the Officer of the Public Guardian and Public Trustee entered into his life.

Four-and-a-half years later, Chris is finally free from the Aged Care home where he has been forced to live.

Four Corners exposed the secretive world of Public Guardianships in their latest episode.

Grief-stricken and locked away

Before his life unravelled, Chris made millions working in the offshore oil industry.

After the tragedy, Chris fell into a deep struggle with alcohol.

“I hit the piss hard, because it was something I really struggled to deal with,” he told Four Corners.

“A bottle a day or whatever. It takes the pain away. And that’s what derailed me from a damn near perfect life.”

In the aftermath, Chris found it hard to care for his surviving daughter.

Authorities deemed him as unable to care for himself and lacking the capacity to make decisions about his life and money.

That’s when the Office of the Public Guardian and the Public Trustee entered his life.

After Chris ended up in hospital with a broken hip, the Office of the Public Guardian decided to force him into aged care.

The Australian system, has about 50,000 people “under orders”. The system’s intent is to ensure that the most vulnerable people get the care that they need.

But the Four Corners investigation showed that they can be forced into aged care or group accommodation against their will.

Those under care are often charged high fees for the management of their funds. If they want to escape the system, the Public Trustee can use the individual’s own money to fight them.

Released from the Public Trustee system by chance

She quickly realised he didn’t belong there.

“In my screening tests, I found that Chris had really quite significant short-term memory issues,” Ms Piekkala said.

Chris had half a million dollars in cash, but the Public Trustee refused to give him access to it. As such, he was unable to hire a lawyer.

Ms Piekkala was deeply disturbed by how Chris was being treated by the agency.

“How can a person in Australia not have the right to have a lawyer when they want to defend themselves?” she told Four Corners.

“There were just too many things that didn’t add up. Particularly because he has a young daughter. I mean, how can they do this to that family? She had already lost her mum and her sister and now she had her dad locked up.”

Ms Piekkala arranged for Chris to have a comprehensive neurological assessment. She also went one step further and lent him the money to hire a lawyer to remove Queensland’s Public Guardian and Public Trustee.

In November, Chris was finally free.

A million dollars lost to the Public Trustee system 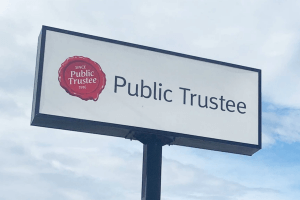 By then, the whole experience had cost Chris a fortune.

Four Corners went through his finances with a team of forensic accountants. They estimate it cost him more than a million dollars. The nursing home fees alone were $250,000.

“I’m very angry. I’ve been asset stripped. I’ve gone from being very wealthy to not that much left extra in the till,” Chris told Four Corners.

“I don’t believe that they act in people’s best interest. I don’t think they care. They’re a body answerable to themselves only, apparently. And there doesn’t seem to be any oversight of the Public Trustee and what they do to people.”

Neither would be interviewed by Four Corners and refused to answer specific questions. However, in a statement, a representative of the Queensland Public Trustee said:

“Four Corners has brought to the Public Trustee’s attention matters not previously raised. We acknowledge the experience of the individuals and have commissioned a priority review of these matters under our independent complaint review mechanism. An external expert will conduct the review.”