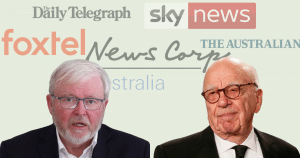 The petition currently has almost 350,000 signatures.

While the petition endorses a general royal commission, Rudd focuses on the power held by the Australian billionaire, Rupert Murdoch.

“This power is routinely used to attack opponents in business and politics by blending editorial opinion with news reporting,” he stated in the petition.

Australians have watched with growing anger at what the Murdoch media monopoly is doing to our country. A cancer on democracy.

Today I am launching a national petition to establish a #MurdochRoyalCommission.

If you value our democracy, please sign here: https://t.co/FjfK7ij7YQ pic.twitter.com/gIGfmMF49W

News Corp owns (or has controlling shareholdings in) a massive list of publications in Australian including;

Outside of Australia, some of the other publications Murdoch owns include:

Analysts have stated that both centre-right and centre-left parties in New Zealand have prevented populist sentiment from taking hold.

Populism is hard to define, but populist leaders include Donald Trump in the US and Rodrigo Duterte in the Philippines. They tend to use “we” and “our” and focus on “the people”, leaving distinct groups outside of that definition. Currently, many populist leaders use immigration in an attempt to emphasise the superiority of the “ordinary” people.

Rupert Murdoch is known for a press that focuses on populist ideologies.

“A huge reason that our politics is not so extremely polarised and so far out there is because we no longer have Murdoch-owned press in New Zealand, and it’s never taken a foothold,” David Cormack, the co-founder of a public relations firm and a former head of policy and communications for the left-leaning Green party told the Guardian.

Advance NZ, a new party in the NZ 2020 election that made its name by campaigning against Ardern’s Covid-19 restrictions, vaccinations and 5G technology. They received just 0.9% of the vote from the 2.4 million New Zealanders who cast them.

You can read more about New Zealand and populism here.

This year, James Murdoch, son of Rupert resigned from the board of News Corp. In his two-line resignation letter, he stated that his resignation was due to “disagreements over certain editorial content published by the Company’s news outlets and certain other strategic decisions.”

James has publicly aligned himself with environmental activism and taken stances against President Trump. James and his wife Kathryn recently donated more than $1 million for a fundraising committee for US Presidential Nominee Joe Biden.

When the bushfires were raging through Australia, James criticised how his family’s media publications were covering climate change.

Having already left Fox Corporation, News Corp was the final tie to cut loose from Rupert’s reign. Although James is still a beneficiary of the family trust, meaning he will continue to financially benefit from the Murdoch empire.

Sign the petition here! Make sure you ensure you confirm your email address.