A Judge described Google’s conduct as “extraordinary”, leaving him “dumbfounded”, during the Barilaro Google defamation hearing in the Federal Court. 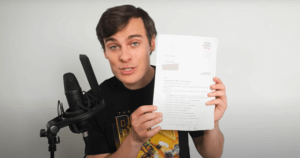 Barilaro launched legal action against both Google and the owner of the Youtube Channel ‘Friendlyjordies’, Jordan Shanks. The suit was over two videos titled ‘bruz’ and ‘Secret Dictatorship’.

Barilaro claimed the videos were “vile and racist” and brought him into “public disrepute, odium, ridicule and contempt”.

The claim against Mr Shanks settled in November last year. Mr Shanks apologised for any hurt caused, edited parts of two videos and paid legal costs, but not damages.

However, the case against Google continued.

Justice Steven Rares said it disturbed him that Google allowed videos gratuitously attacking Barilaro’s lawyers to be published in 2021.

“It’s just extraordinary [that] Google is behaving in this way. I’m just completely dumbfounded by this,” he said.

“It looks like a very serious, likely finding of contempt by a publication, [designed] to intimidate [lawyers] from acting and therefore stopping Mr Barilaro’s access to justice,” Justice Rares said.

“Shanks was quite determined to frustrate the course of justice … to get to the point that his lawyers wouldn’t want to appear for him.

Google was put on notice about the material and asked to remove it. However, the company refused to do so. It is from the point that they were aware of the material that Mr Barilaro has sought compensation for defamation.

Google initially defended the case but has now withdrawn all defences and conceded the video was defamatory.

Barilaro’s barrister Sue Chrysanthou SC argued that Google’s conduct served to aggravate the damage done. She said that Google was relying on “rubbish” defences for seven months, only to withdraw them without explanation this week.

Google’s barrister James Helnitsky SC indicated that he, too, thought the defences were baseless. According to the ABC, this gave rise to some amusement in the courtroom.

However, Google argued that the damage had already been done to Mr Barilaro’s reputation when they became liable for the publishing of the material.

Ms Chrysanthou told the court that a high figure ought to be awarded to Mr Barilaro because of Google’s conduct.

She argued that prior to the videos, Mr Barilaro had good reputation as a popular MP who made his seat safe.

“Now his reputation has been ruined and we are seeking compensation for that,” she said.

The maximum cap on damages for defamation is $432,500 when there are no aggravating features.

Ms Chrysanthou argued that there were many aggravating features, including that it was a “campaign” against the former MP.

Responsibility to not waste Court time

Justice Rares took some final hits at the tech giant for wasting the Court’s time.

During the hearing, he repeatedly criticised the multinational company for failing to send any representatives to court.

His Honour accused Google of wasting the court’s time and Mr Barilaro’s money.

“There’s a duty under the Federal Court to cooperate as quickly and efficiently, to get to the real issues and not waste the court’s time,” he said.

“If this was uncontested this could have been heard last year.”

The hearing is now adjourned while Justice Rares considers his judgement.

If you experienced defamatory material posted on a Google property, such as YouTube, contact our defamation lawyers today.