The family of an Indigenous man who died after a hospital sent him home is demanding a coronial inquest in what they characterise as healthcare racism. The family held a protest at Dubbo Hospital demanding accountability and urgent reform in the treatment of Aboriginal people.

According to family, the hospital released the 36-year-old man without treatment partly because he was Indigenous.

Dougie presented to the hospital with severe stomach pain and a popping/tearing feeling in this stomach on 15 August. He underwent sedation and got painkillers. The hospital then sent him home, according to a statement from the National Justice Project.

Dougie passed away within 18 hours from two perforated duodenal ulcers

However, Dougie’s father, Ricky Hampson Sr told The Guardian that he believed his son experienced a dismissal of his issues due to being Aboriginal. That, and his admission to smoking recreational marijuana.

“An Aboriginal person turns up and admits to smoking marijuana, they presume straight away that because he’s complained of pain in his abdomen, they put it down to cannabinoid hyperemesis syndrome.”

“We want a coronial inquest into Dougie’s death. We want change within the NSW health system,” Hampson Sr said. 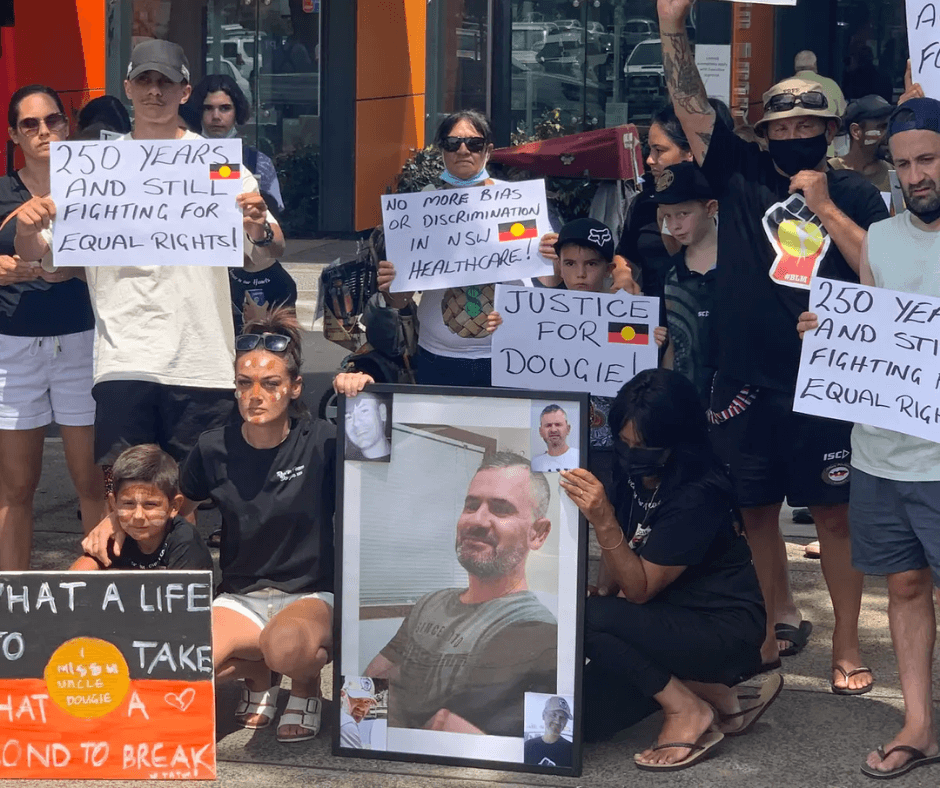 In response, family, friends and other protestors gather at a Dubbo park and marched to Dubbo Hospital. Protestors carried signs and photographs of the deceased father.

“A simple scan would have saved Dougie’s life,” one sign stated.

Dougie’s eldest child, Talesha Murray told the rally that she felt for her brothers and sisters. The youngest of whom is seven years old.

“Today shouldn’t even be happening but we are here. I want justice for my father and every black person who got put in the same situation,” Murray told The Guardian.

The NSW Government is already aware of similar previous incidents of medical bias.

For example, twenty-seven year old Wiradjuri woman Naomi Williams died of a treatable infection at Tumut Hospital in 2016. The coroner found that the six-month pregnant woman experienced treatment with an implicit bias due to her Aboriginal status.

Subsequently, the deputy state coroner made “profound” recommendations after her death. However, they were yet to see implementation statewide or nationally.

Wendy Brookman, a Butchulla woman who attended the protest for Hampson, said: “It’s not the first time and the scariest thought is that we don’t believe it’s going to be the last either.”

If you believe that you, a family member or friend got inappropriate health treatment based on being indigenous, contact us now.