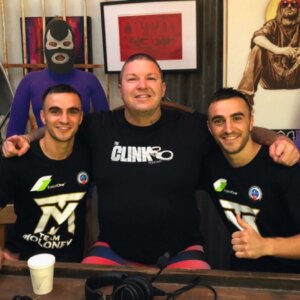 Jason and Andrew Moloney are both on the verge of boxing stardom.

The twins are hyper-competitive with each other, driving their passion for boxing. When they were 13, they managed to convince their dad to take them down to the local boxing gym and the rest is history. The AFL-loving boys ended up kicking the red Sherrin away permanently for some red gloves.

“Eventually, we ended up giving up footy and just said we want to concentrate on boxing and go all the way. Here we are, doing something we love and very close to achieving the dream of becoming a world champion,” Jason told ESPN.

“We’ve always had this competitiveness between each other,” Andrew told ESPN.

Listen to the full episode on the Moloney Twins on The Clink. You can get The Clink on apple podcasts, spotify or wherever you get your podcasts!