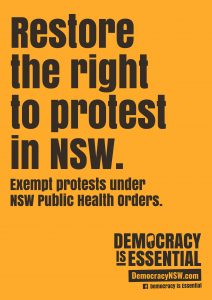 O’Brien Criminal & Civil Solicitors proudly endorse the campaign to restore the right to protest in NSW.

The “Democracy is Essential” campaign is kicking off tomorrow night with NSW Greens MLC David Shoebridge and former NSW Senator Lee Rhiannon speaking at the launch.

The campaign aims to highlight the disparity between the health order restrictions for commercial operations, compared with democratic protests.

“While much of NSW is open for business and large gatherings are allowed for commercial venues and sporting events, COVID-safe protests against social injustice and austerity have been dispersed under Public Health Order restrictions. Activists have been fined thousands of dollars with the threat of larger fines and jail time,” states the Facebook event.

“Our democratic rights are under severe attack.”

Nephew of David Dungay, Paul Silva will be speaking at the event. The Dunghutti man was arrested at the most recent Black Lives Matter protest as he fought to end the deaths of Indigenous people in custody like that of his Uncle. Four others were arrested at the protest, before the rally even began.

Twelve people were arrested across two protests at Sydney University against job cuts and education hikes on 31 July and 28 August.

All those arrested were issued $1,000 fines, with the potential maximum punishment $11,000 fine and 6 months imprisonment.

Supporters of the campaign do not deny that public health orders need to be in place for the State to protect its citizens.

“We, along with the majority of Australians, support the various restrictions and lockdowns that have been in place in recent months to control the spread of the deadly Coronavirus. Indeed, many of us have argued that they should go further. But at the moment, protests are being singled out in an absurd and hypocritical way,” the campaign stated in their open statement.

No single documented case of Coronavirus spread has occurred at a protest in Australia.

Are citizens being asked “Just put the protests on hold”?

The protests that are currently trying to have their voice heard come from desperation. Protesting is often the last resort when the public and politicians don’t listen to the concerns of its citizens.

“Black deaths in custody and racism in the criminal justice system continue. Refugees continue to be imprisoned on Nauru and in city hotels. The climate catastrophe rolls on, with the Morrison Government green-lighting a further expansion of the fossil fuel industry. The working class faces an unprecedented crisis of mass sackings, unemployment, and attacks on wages and conditions in the coming months. We need the right to protest more than ever,” the statement continued.