To criminal defence lawyers, clients getting charged with offensive language, assault police and resist arrest is called the ‘trifecta’.

Offensive Language – Under the Summary Offences Act 1988 (NSW) section 4A, offensive language is illegal if someone uses it in or near, or within hearing from a public place or a school.

Resist Arrest – Resisting a police officer who is arresting you is illegal under section 546C of the Crimes Act 1900 (NSW). Resisting arrest means that you’re not complying with the police officers’ directions for your arrest. This can include being a ‘dead weight‘.

Assault Police – Under section 60 of the Crimes Act 1900 (NSW), it is an offence to assault, throw something at, stalk, harass or intimidate a police officer.

Depending on the damage caused and the circumstances of the event, you could be liable for up to 14 years imprisonment.

Technically, assault can include the slightest touch but usually includes punching, kicking, pushing or spitting. 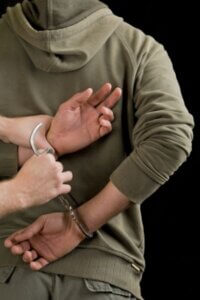 At the inquiry into the death of Aboriginal man David Gundy in 1991, Commissioner Wootton commented on the flow-on effects of public order legislation like offensive language.

“Too often the attempt to arrest or charge an Aboriginal for offensive language sets in train a sequence of offences by that person and others ­ resisting arrest, assaulting police, hindering police and so on, none of which would have occurred if the police were not so easily “offended”,” he said.

“It is particularly ridiculous when offence is taken at the ranting of drunks, as is so often the case. Charges about language just become part of an oppressive mechanism of control of Aboriginal people].”

In 2011, the NSW Ombudsman found the 11% charged with offensive language were Aboriginal or Torres Strait Islander, despite only making up roughly 3% of the population.

Further, according to the NSW Ombudsman, 89% of Aboriginal and Torres Strait Islander people issued with a Criminal Infringement Notice failed to pay on time and were referred to the State Debt Recovery for enforcement. By comparison, 48% of all CIN penalty notices were referred for enforcement.

Police arrested Lance Carr, a young Indigenous Australian man, for offensive language. The victim of this offensive language, a police constable, had approached Lance in pursuit of some information about rocks being thrown at a passing police car. Lance was not a suspect for this incident.

The conversation soon turned into an argument between Lance and the officer, with Lance telling the officer: ‘Fuck you. I didn’t fuckin’ do it. You can get fucked.’ It was at this point that the officer placed Lance under arrest for offensive language.

By the time Lance was in police custody, they laid two more charges. Those charges were resist arrest and assault police. Lance’s behaviour in the dock at the police station was used to substantiate a further charge of intimidating police. Lance was charged with four offences, all stemming from the fact that he was uncooperative towards the officer.

The issue before the magistrate was whether it was necessary to have arrested Lance, rather than issue him with a future court notice. The additional charges would not have occurred if this happened. The magistrate found that the arrest was improper and therefore did not accept the charges made out after the arrest occurred.

On appeal, Associate Justice Smart of the NSW Supreme Court dismissed seven of the eight grounds of appeal submitted by the Director of Public Prosecutions (DPP). The DPP only succeeded on a procedural ground, because the magistrate had relied on material that was not tendered in evidence when reaching his decision. As Smart AJ, who largely agreed with the magistrate at first instance put it:

This court has been emphasising for many years that it is inappropriate for powers of arrest to be used for minor offences where the defendant’s name and address are known, there is no risk of h1m depart1ng and there is no reason to believe that a summons will not be effective…The consequences of the employment of the power of arrest unnecessarily and inappropriately and Instead of issuing a summons are often anger on the part of the person arrested and an escalation of the situation leading to the person res1sting arrest and assaulting the police. The pattern in this case is all too familiar.[9]

If you have been arrested and charged with any of these charges, call us for a free initial consultation. We can also assist you in getting compensation if the arrest is unlawful. Call us today on 02 9261 4281 or