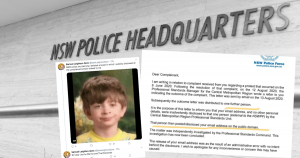 Remember how NSW Police leaked 150 emails belonging to complainants who were concerned about the use of pepper-spray at the BLM protest? Well, now they’re blaming the person they leaked the information to.

Back in August, Samuel Leighton-Dore received an email from NSW police about his complaint. Afterwards, he received another email that leaked the email addresses of every single other person who also complained.

So the @nswpolice just forwarded me, accidentally I assume, the names and emails of every person who complained about the Central Station incident. Felt like a significant data breach, so I called up to suggest an OAIC report, and they hung up on me. Yo @GladysB pick up your kids

NSW Police confirmed that made an “admin error”.

However, on Monday, Samuel received another email. This time is stated that the information was leaked to one person, who “posted/disclosed your email address on the public domain.” 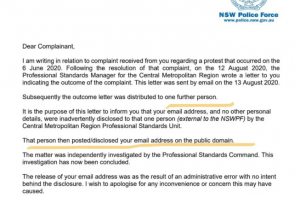 Samuel reiterated to Gizmodo that he never posted the email addresses publicly.

Samuel is understandably furious with NSW Police blaming him for the privacy breach on their behalf.

“Since filing my initial complaint about the NSW Police force’s use of pepper spray against peaceful protesters on June 6th, I’ve been met with a seemingly unending chain of bureaucratic subterfuge, gaslighting and non-accountability from the NSW Police,” he told Gizmodo.

“If the police are left to investigate themselves, if the police are able to make baseless claims against members of the public in an official capacity, if there’s no real infrastructure for the investigation of NSW Police, how are we not living in a police state?” he said.