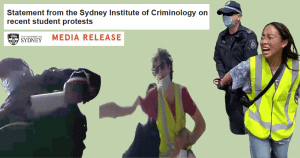 The Executive of the Sydney Institute of Criminology has condemned the misuse of power exercised by NSW Police force at recent protests.

The two Directors and two Deputy Directors concurred with the Vice Chancellor’s description of footage as “disturbing”.

While citing safe COVID-19 behaviour, the Executive made it clear that they support peaceful protests.

“We express our support for the right of students and staff to engage in peaceful protest, and to observe protests, on and around the grounds of the University of Sydney in a COVID-19 safe manner,” they stated in a press release.

The Executive is pushing for more information from the NSW Police Force about the conduct of the officers at recent protests.

“We request that the NSW Police Force give immediate consideration to the proportionality and legitimacy of its policing operations at and around the University of Sydney in recent months – with a view to ensuring that any oppressive police activity at that location is not repeated.”

The University of Sydney deny claims they colluded with NSW Police

“We did not invite NSW Police on to campus today,” a statement from the University of Sydney declared.

“NSW Police did contact us once ahead of the event, and twice during it. We confirmed we were aware activity was planned, based on social media. We provided no further information or judgement about the activities, and did not make any requests.”

Emails obtained under Freedom of Information legislation, however, show a Senior Manager from USyd initiating correspondence with the Inner West Police Area Command asking police to assess photos of protests to determine whether they are illegal and constitute a mass gathering.

“We have our own crowd management protocols to ensure a safe environment for all events including protests. NSW Police also make their own decisions and take actions they consider necessary in the interest of public safety, including under the Public Health Order,” the statement continued.

The Sydney University Education Action Group (SUEAP) shared footage from a broken phone, where a legal observer was seemingly pushed to the ground by a police officer. You can see the video in the following link:

“I’m not part of this protest, I’m only getting evidence,” he can be heard saying to an officer.

Wearing a yellow hi-vis, the man is heard being polite to the police, while handing legal information cards as people get arrested.

Legal observers are important parts of protests. They don’t act in line with protestors but are there to gather footage to ensure the behaviour of both protestors and police officers. They hand out slips of paper to anyone who has been arrested so that they can make sure their rights are observed and they have access to legal representation.

If you’ve been affected by actions of NSW Police at any protests, contact O’Brien Criminal & Civil Solicitors ASAP on 02 9261 4281 or .