NSW Police are planning on attempting to block a Mardi Gras March which will see roughly 4,000 people march down Oxford Street in Sydney’s east.

In lieu of the normal street closures for the parade, a march will take over the main strip of Oxford Street as protesters make multiple demands. 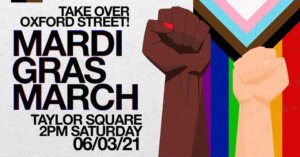 A history of the Mardi Gras protest

NSW Police violence against the LGBTQI+ community was the catalyst for the first Mardi Gras march in 1978. Since then, the march has turned into a parade of celebrations of queer communities and identities.

“In this joyful march of resistance, we pursue nothing less than full liberation. Liberation for trans people who are being attacked by the Liberals, One Nation, and the Murdoch press. Liberation for Bla(c)k peoples who are over-policed and being killed by the ‘justice’ system. And liberation for refugees who languish in detention,” the event on Facebook states.

Greens MP David Shoebridge wrote to the Government requesting an urgent amendment to the Public Health (COVID-19 Restrictions on Gathering and Movement) Order (No 7) 2020. This amendment would increase protest limits to 3,000 people.

“I note that on 6 February 25,295 people attended the Sydney Cricket Ground. No community spread has been linked to this large gathering.

On 26 January at least 6,000 people gathered to protest in the Domain. There was no community spread of COVID associated with this gathering.”

“The right to protest is a fundamental right in a democratic society and one that should only be constrained when it is critically necessary for serious public health threats. This circumstance does not currently apply in NSW.”

If you’re affected by police action at the march this Saturday, contact O’Brien Criminal & Civil Solicitors. We are expert lawyers in criminal defence and also in taking civil action against the police.