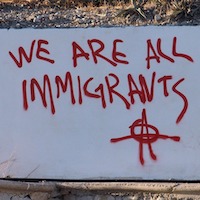 A detainee asylum seeker at Christmas Island was subdued by five guards when his head was pressed down into the ground, knocking loose one of his teeth.

CCTV footage, obtained through freedom of information laws, shows Mr FE* appearing to be punched before he was wrestled to the ground. His head is turned to the side while a male guard pushed it down, knocking a tooth loose.

The Australian Human Rights Commission (AHRC) concluded that the loose tooth was a direct result of the action of that guard.

“I am satisfied that Mr FE’s mouth was injured as a result of the use of force incident and that he was spitting out blood,” the commission concluded.

The Department of Home Affairs (DHA) told the Human Rights Commission that the footage should be suppressed as it would have a “substantial adverse impact” on Serco. This is the multinational company that provides security to immigration detention centres.

“The release of this information could result in operational and administrative inefficiencies for Serco, and, ultimately, expose the Commonwealth to additional contractual burdens,” the department said in a consultation letter to the commission.

In an internal Serco investigation, they found that “poor operational decisions” were made in the lead up to the use of force. “It is the view of the investigator that there is no discernible attempt to de-escalate the situation,” a copy of the investigation provided to the AHRC noted.

A disagreement as to what happened

Mr Fe was returning to his accommodation after collecting his medication at the dispensary when there was a disagreement as guards opened the door to the block.

Serco stated that MR Fe was threatening them, while Mr Fe stated that a guard elbowed him in the chest. “[Footage] shows that when Mr FE enters the accommodation block, he is wearing slippers. He is moving slowly and does not appear agitated,” the AHRC found.

Inquiry into force inside detention centres

The AHRC has already recommended that the DHA conduct an inquiry into the use of force in detention last year.

The DHA did not accept this recommendation.

This comes just weeks after the Federal Government attempted to ban mobile phones in immigration detention.

The legal director of the Human Rights Legal Centre David Burke told SBS that there needed to be a public inquiry.

“As a first step to improving this system, the government must comply with the Human Rights Commissioner’s recommendations for a public inquiry into the use of force in immigration detention, so that we can see what is happening behind closed doors.”

If you’ve been affected by the actions of guards within immigration detention, contact O’Brien Criminal & Civil Solicitors for a free initial consultation.

*not his real name