The Government has been called to step in to assist First Nations families who lost money to a funeral insurance fund which seemed to be Indigenous owned and created.

Ngemba woman, and Greens candidate for Parkes Trish Frail spoke in Dubbo today about the collapse of Youpla Group.

Greens NSW Senate candidate David Shoebridge stood alongside Frail, seeking feedback from First Nations people who have lost thousands by the collapse of the company.

After coming under scrutiny by the Australian Securities and Investment Commission (ASIC) in 1999, 2004 and 2020, ACBF changed its name to ‘Youpla’.

In 2017, just prior to the Royal Commission into Misconduct in the Banking, Superannuation and Financial Services Industry, Vanuatu-based founder, major shareholder and non-Indigenous person Ron Pattenden hired the non-indigenous Bryn Jones to represent the firm at the Royal Commission.

“They built trust with their name and then took money from vulnerable people,” she said.

“We’re not talking about people with big incomes, they were taking money from some policy holders that would have been equal to about 25% of their small income.”

“Regardless of who wins the May election, the Greens will be working with community to develop a comprehensive policy to assist up to 15,000 First Nations people who have been robbed of their savings and peace of mind with the collapse of Youpla,” Shoebridge said.

“What is so frustrating about this is it was so predictable,” Shoebridge said.

“The Royal Commission into the Banking industry told the government this was a dangerously unregulated industry preying on vulnerable client.”

In dozens of cases the ombudsman found that ACBF misrepresented itself as an Aboriginal-owned and controlled not-for-profit, community organisation serving the Aboriginal and Torres Strait Islander community.

ACBF was found to have sold vulnerable Aboriginal people low-value funeral insurance, including cover for children and babies. However, people allegedly paid more over time than the policies were worth.

Wiradjuri woman, Beverly Roberts joined one of Youpla’s funds in 1994, soon after she’d lost 4 family members in the space of a year and experienced the difficulty of providing a respectful and timely funeral and burial. She covered herself and close family members, most recently paying the funeral fund up to $87 a fortnight.“Who’s going to pay for my funeral now? All that money is gone and I’m so wild about it.”

“When I joined twenty eight years ago I wasn’t a diabetic, and I didn’t have leukemia. Now that I have those diseases, what are my chances of another funeral fund covering me? None!”

“The fund didn’t even bother letting me know, I just heard a rumor on social media and I’d already let an extra payment go through.” 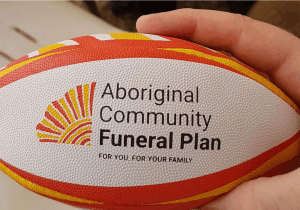 Commissioner Kenneth Hayne was scathing of the company’s conduct in his interim report. He expressed concern the company possibly breached the ASIC Act.

“I consider that ACBF may have breached its obligations … to not engage in conduct that is misleading or deceptive, or is likely to mislead or deceive,” the report said.

Frail emphasised that policy holder thought they were doing the right thing. They were just trying to protect their families from the expenses and possible debt of funerals and end-of-life costs.

“We all struggle financially when we have to deal with Sorry Business, so we do the right things and sign up to protect ourselves,” she said.

“Instead of protection we get ripped off.”

“Why has no government been able to fix this shonky business in over 30 years? If it was an non-Aboriginal community that was being ripped off I’m sure there would have been legislation put into place by now.”