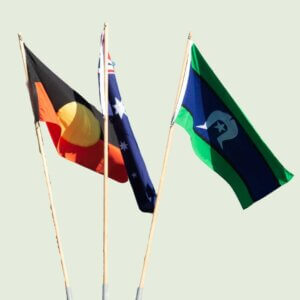 The federal government has voted against a motion to hang the Aboriginal and Torres Strait Islander flags in the Senate, during NAIDOC Week of all weeks.

Senators Pat Dodson and Malarndirri McCarthy from Labor and Senator Lidia Thorpe from Greens moved a motion to fly the flags alongside the Australian flag in the Senate. The three Indigenous Senators respectfully made this motion with support from their parties.

The motion failed, 29 to 28 with the Liberal and National Party coalition siding with One Nation.

The Aboriginal and Torres Strait Islander Flags are national flags of Australia, recognised since 1995 under the Flags Act 1953. All three flags are flying outside Parliament House during NAIDOC Week, yet not inside the two houses of Parliament. #shame #auspol pic.twitter.com/BmtUzhzOyF

Is the Australian Flag representative of all Australians?

Families and Social Services Minister Anne Ruston said the government through the “only appropriate flag” to fly in the Senate was the Australian Flag.

“There are many places and circumstances to appropriately display the flags of our nation, including the Aboriginal and Torres Strait Islander flags,” she told the chamber.

“The government believes that the Australian national flag, which represents all Australians, is the only appropriate flag to be flown in the Senate chamber.”

However, it’s clear that the Australian flag simply does not represent all Australians.

Flying additional flags, within the Senate, seems like the bare minimum the Federal Government could possibly do, especially during NAIDOC Week.

The decision has been slammed online by commentators with the official NAIDOC twitter account adding to the feedback.

On 26 Jan 1938 at one of the first major civil rights gatherings in the world – the Day of Mourning – we asked for basic human rights. Today 82 yrs later in the week borne from that day we asked for our flags to also be flown in the Senate chamber. Just the flags..nothing else.

“I appeal to the Senate, when we fly the flags out the front as we do this week, we have it on display for the whole of the country, in NAIDOC week, [for] an opportunity to show that we can unite our country,” she told the chamber.

Gunnai and Gunditjmara woman Senator Thorpe passionately reminded the Senate of the land in which they sit.

“May I remind you all that we are on stolen land? The Aboriginal flag represents the oldest continuing, living culture in the world,” she said.