When facing a sentence for a criminal or traffic offence, often one of the primary concerns is what the impact of a conviction will be and whether it can be avoided.

A criminal conviction has the possibility of impacting upon employment, travel and your general character.

For many people who are facing a sentence, they have heard of a “s 10 “ but do not fully understand what this means.

A section 10 is a sentence option that is available to the court which allows for it to dismiss a charge or not record a conviction.  A section 10 with no conviction means that they don’t record it on your criminal record. 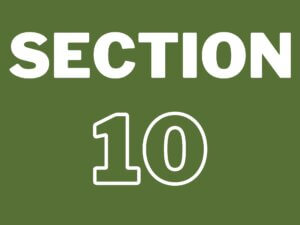 In fact, s 10 Crimes (Sentencing Procedure) Act 1999 allow for three sentence options which the court may imposed if it was to proceed without recording a conviction.  The orders are as follows:

A conditional release order (CRO) is a type of ‘good behaviour bond’ imposed with or without proceeding to conviction.  At the sentence proceedings, it is important to put before the court the legal arguments as to why the court should not impose a conviction.

Dismissing an offence pursuant to s 10(1)(a) is the most lenient sentence outcome a court can order.  To make such an order, generally, it is argued that there extenuating circumstances surrounding the offending or compelling subjective factors that arise.

This order should not be confused with an order pursuant to s 10A.  This is an order when the court does record a conviction but does not impose any other penalty such as a fine or a CRO.

Factors the court will consider

Pursuant to Section 10(3), when deciding whether to make an order for a s 10 dismissal or CRO, requires the court to have regard to the following factors:

Often what will dictate whether the court will entertain making a s 10 will be the seriousness of the offence and the court’s assessment as to the objective serious.

For some offences such as a violent offence in a domestic context or high-range drinking driving charge, the sentencing principle of general deterrence and denunciation are important factors in sentencing for the offence.  For such matters, the court has become increasingly reluctant to exercise its discretion to not recording a conviction.

Mr Mauger pleaded guilty to the supply of 20 ecstasy tablets and a small amount of cannabis (taken into account on a Form1).  The offence was deemed supply as Mr Mauger had the drugs in his possession with intention to provide the tablets to his friends, rather than selling them for profit.  He was dealt with in District Court by a s 10 bond (now called a ‘CRO’) for a period of 2 years.  The Crown appealed this decision to the NSW Court of Criminal Appeal on the basis that sentence was not manifestly adequate. However, that appeal was unsuccessful.

R v Mauger is an authority that as a ‘general proposition’, the fact that the court records a conviction is a matter of special significance.  His Honour Justice Harrison made clear that considerations of extra curial punishment, such as loss of employment, may be relevant to the exercise of the discretion that s 10 confers.  In Mauger the court a held that the legal and social consequences for recording a conviction far outweighed the requirements of punishment, denunciation and (specific and general) deterrence.

It must be observed that even in circumstances where the court is dealing with serious offences at a sentence, it is clear that nothing precludes the court from considering s 10 and non-conviction. Often the success or failure of an argument for a s 10 will depend upon the evidence that can be put before the court for the sentence proceedings.

It is important to receive legal advice regarding this issue before proceeding to sentence if you are hopeful for a s 10 and non-conviction.

Go here for more information about section 10 dismissals without conviction.

To speak to one of our criminal solicitors, contact 02 9261 4281 and we can organise a free initial consultation.