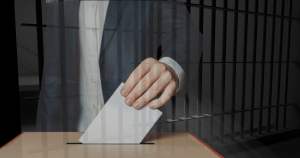 History will be made in October when thousands of prisoners at correctional centres across Queensland will be given the right to vote at the upcoming state election.

In January, the Queensland Government passed laws lifting the incredibly restrictive prisoner voting laws. The previous laws barred inmates from participating in state or local government elections at all.

However, those serving more than three-year sentences will not be eligible to vote.

Who runs the prisons in Australia?

State governments run correctional centres. Even those charged under federal law will be sentenced into a State-run facility. A responsible and representative government must be one that was elected by the people. The prison population are no exception, especially when their treatment is often far under the radar of the general population.

National human rights spokesman for the Australian Lawyers Alliance, Greg Barns SC, told the ABC that all prisoners should be entitled to vote, regardless of the length of their sentence.

“Why is it that the right to vote depends on your conduct? There are plenty of people in the community who behave disgracefully,” he told the ABC.

“Prisoners themselves have no voice, unlike everybody else in society — everyone has a voice at the ballot box but they have none,” he said.

The move will see 2,674 more ballots cast in the election this year.

As a prisoner, can I vote in an election?

A prison system in need of reform

As a part of the extensive lockdown, prisoners across Queensland have rioted against the lack of basic services such as meals and medications.

In an open letter to the Premier, the mother of a teenager at Arthur Gorrie Correctional Centre detailed the “brutal and inhumane” conditions. In the letter, she stated that some prisoners were forced to sleep naked, some with no clean clothes for a week and were just given one meal a day.

“This is a constant, ongoing system fail. We want answers,” the mother penned.

Chief Executive of Sisters Inside Debbie Kilroy stated that voting restrictions had a disproportionate impact on the Indigenous population.

Kilroy has also pushed for improved access to news in prisons, and for political candidates to host forums in correctional centres.

“Politicians get off easy with regards to criminalising and imprisoning people, but they don’t actually have to address people affected by that,” she told the ABC.

The Liberal National Party of Queensland were quick to politicise the move, aligning the democratic right to vote with being “soft on crime”.

“Unlike Labor, who are soft on crime, currying favour with people who have broken Queensland law is not a priority for the LNP,” the opposition party said in a statement.

“Those who break the law should not have the right to participate in deciding who makes the law.”

We at O’Brien Criminal & Civil Solicitors fiercely object to this stance. The right to vote is a political right inherent in the Constitution, and the removal of such right based on imprisonment is nonsensical.

People break the law every day, from jay-walking to corporations involved in tax avoidance, these people aren’t, and rightly shouldn’t, disqualified from voting.

The extra 2,500 odd votes at the ballot this year won’t tip the scales, but it will ensure that those held in detention have their voices heard.

This small step is nonetheless an essential one for the push to reform Australia’s prisons.

O’Brien Criminal & Civil Solicitors supports the movement for all prisoners to have the basic right to vote.