The NSW Government plans to dramatically increase fines for unions that take strike action not approved by the State.

NSW Labor leader Chris Minns said Labor will block the new bill and criticised the new premier for failing to do what his predecessor was capable of.

“To give credit to Gladys Berejiklian, she seemed to be able to reach across the divide – avoid strikes and look after essential workers. This is a skill that‘s beyond the new Premier,” Minns said.

“Why not try negotiating with your workers rather than fining them into submission?”

The NSW Government is in dispute with a range of public sectors of wages and conditions including nurses and teachers.

NSW Finance Minister Damien Tudehope said they will increase the fines for strike action taken without approval from the Industrial Relations Commission (IRC).

“These fines today should act as a deterrent for not conducting illegal strikes,”

What is ‘illegal’ striking? 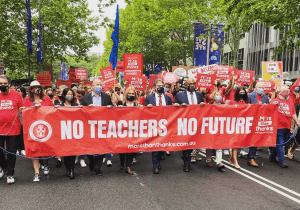 Strikes take place when workers’ needs for wages and conditions go unmet. The collective bargaining power of the employees working as one is more powerful than each individual employee.

Under WorkChoices in 2005, a very complex scheme came into effect to determine whether a strike was ‘protected’ and lawful, or not.

If the union failed to comply with the “highly prescriptive and technical requirements”, the industrial action was ‘unprotected’ and opened organising unions to penalties.

Even after the Fair Work Act came into effect in 2009, stringent requirements on strikes were maintained.

The International Labour Organisation (ILO) is highly critical of Australia’s compliance with the right to strike.

The criticism mainly comes from the Committee of Experts on the Application of Conventions and Recommendations within the ILO.

The right to strike is a fundamental pillar of a democratic society relying on essential workers whose conditions are decided by the State.

The new laws would see unions fines up to $55,000 for strike action taken in defiance of IRC rulings. Each day after that would incur an additional $27,5000. Unions that repeatedly breach the orders would face fines up to $110,000.

Secretary of Unions NSW Mark Morey said the bill was an affront to frontline workers such as nurses and teachers.

“This is some of the most anti-democratic legislation I’ve ever seen,” Morey told The Guardian.

“It’s completely bloody-minded. The worst sort of bullying of the workforce I’ve seen in many years.”

Teachers strike together for first time in 30 years

The NSW Budget delivered last Tuesday had no further wage increases for teachers.

Head of the Teacher’s Federation Angelo Gavrielatos soon after announced that the public and Catholic school teachers would strike together, for the first time in 30 years.

The new fines won’t be in place in time to cover the upcoming action. However, that doesn’t mean that teachers don’t have concerns.

“Rather than taking action on the teacher shortage it appears that the only thing this government is interested in taking action on is aimed at silencing teachers, principals and their union,” Gavrielatos said.