The National Aboriginal & Torres Strait Islander Legal Service (NATSILS) has created a petition calling on Prime Minister Scott Morrison to meet with the families of those who died in custody on the 30th anniversary of the Royal Commission next year.

2021 will be the 30th anniversary of the Royal Commission

The Royal Commission into Aboriginal Deaths in Custody concluded in April 1991, after examining the deaths of the ninety-nine Aboriginal deaths in custody that occurred between 1980 and 1989.

Since that date, 441 Indigenous people have died while in police custody, or in prison. No police officer or authority has ever been convicted for a Black death.

NATSILS has started the campaign to continue the noise surrounding Black Lives Matter and for meaningful change to occur.

“Our people continue to die at horrific rates. There is no accountability and no justice,” the petition states.

“We call on the Prime Minister to meet us face to face on the 30 year anniversary to hear our stories, to see our pain, but most of all we want answers.”

Sign the petition below, or via the link here.

See some of our other articles on deaths in custody:

Calls for oversight of deaths in custody 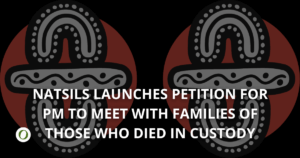