In February 2020, The Australian Financial Review published an article on Nigerian-born man Vincent Ejueyitsi titled “‘Life experience degree’ does not make you a lawyer, court says”

The article made imputations that he attempted to obtain a law degree by fraudulent means.

The plaintiff got sufficient legal training to become a lawyer

With a Masters Degree in Public Health and lecturing at Curtin University, Vincent began studying a degree relating to law at an online university in his spare time.

After establishing his interest in the legal system, he approached the following bodies:

He did this in good faith to enquire whether the degree he had done online would get recognition as going towards the requirements to become a lawyer in Australia.

Those bodies told him that it would give him partial accreditation. Additionally he would need to complete certain law subjects and practical legal training.

Based on this advice Mr. Ejueyitsi, at considerable expense, enrolled in and successfully completed a number of the required legal subjects at Australian Universities. He also passed the College of Law practical legal training and he received a certificate.

However, in 2016, five years after the initial advice, the Victorian Council of Legal Education revoked the partial accreditation. Mr. Ejueyitsi had a clear and justifiable grievance with the admission bodies. They had given him advice in 2011 and he had spent money as a result of that advice.

Mr. Ejueyitsi did make an error in the manner in which he sought to address this grievance. He attempted to do this through the Federal Court. That court found that it did not have jurisdiction to hear the matter as the matter had no “Federal element”.

O’Brien Criminal & Civil Solicitors represented Mr Ejueyitsi. Initially, we sent a Concerns Notice to the Australian Financial Review on his behalf. A Concerns Notice is often a prelude to a possible defamation action.

Consequently, after negotiations, Mr Ejueyitsi received a large sum of money, nearing six figures. Also he received an apology on both the printed and online version of the Australian Financial Review. 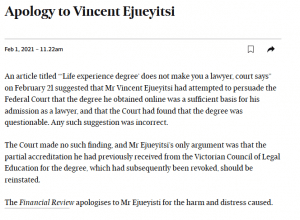 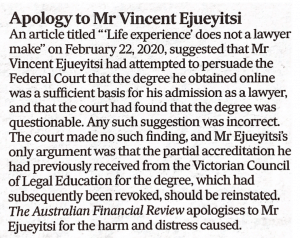 If you have suffered defamation by a media organisation, contact O’Brien Criminal & Civil Solicitors for potential no win, no fee representation.