An inmate has been found unresponsive in his cell at Junee Correctional Centre on Tuesday morning.

Corrective Services NSW sources confirmed to The Daily Telegraph that a male inmate at the privately-run prison died in custody. 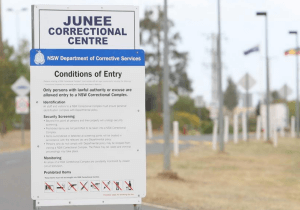 Junee Correctional Centre is operated by GEO Group Australia. A spokeperson for GEO confirmed the news to NewsLocal.

“The man was found unresponsive in his cell by staff around 5.15am and was pronounced deceased at 6.11am,” the spokesman said.

“Corrective Services NSW and NSW Police are investigating the incident. All deaths in custody are subject to a coronial inquest.

“GEO extends its condolences to the family and friends of the man.”

Lack of communication with families of those who die in custody

Prisoner Advocate Renee McNab has spoken with many families who have had loved ones passed away in custody.

The most disturbing information is the radio silence.

“Time and time again I hear from families with a loved one who has passed, that have received no communication from Correctives Services,” McNab said.

“After the police deliver the news, they hear nothing for days on end, despite desperate attempts to get in touch with the prisons.”

“The family is denied empathy and compassion.”

“There are cultures with specific end of life practices that need to be observed and the lack of communication can cause extreme stress and anxiety, on top of the grief,” McNab said.

Ms McNab urges Corrective Services to have a higher appreciation for the value of life.

“At the end of the day, these people are human beings.”

Two deaths in custody in one week

The recent news comes just after revelations that a 41-year-old man died in prison in Grafton on the weekend.

“It is tragic that we have seen two deaths in custody this week,” Ms Moriarty told NewsLocal.

“This is not something that should be happening, particularly when these inmates are in the custody of the state.”

Death will have an investigation by coroner

All deaths in custody are subject to an inquest from a NSW coroner.

The role of the Coroner is to determine the manner and medical cause of death of the deceased.