Children who suffered sexual abuse in juvenile detention aren’t able to claim the same level of compensation as other victims of child sexual abuse.

When the State of NSW has a duty to not only care for but also rehabilitate young offenders, why is their liability limited in such a way that places blame on the victim?

Principal Solicitor Peter O’Brien has written an open letter to the NSW Attorney-General Mark Speakman demanding change on this issue.

The Civil Liability Act 2004 (NSW) at section 26B(1)(a) limits personal injury payouts for inmates who were imprisoned at the time of the ‘incident’. The section was introduced in 2004 as an attempt to “rein in” compensation claims against prisons.

However, there was no indication in 2004 that this amendment would extend to child sexual abuse.

The State of NSW is currently using these laws to apply to claimants who were abused whilst they were a child in custody before January 2019.

The provisions prevent offenders receiving personal injury damages for the State’s negligence, unless the injury resulted in death or a significant degree of “permanent impairment.”

LIVES RUINED AT THE HANDS OF CORRECTIONAL CENTRES

Victims of child sexual abuse, regardless of if they were in custody, can suffer from a range of conditions including PTSD and anxiety. They often develop complicated relationships with drugs and alcohol to deal with the trauma.

A study in 2000 an Australian study reported that victims who were abused as children had significantly higher rates of major depression, attempted suicide, conduct disorder, alcohol dependence, nicotine dependence, social anxiety, rape as an adult and divorce (Nelson et al. 2000).

Most seriously, sexual victimisation is a significant risk factor for suicide attempts for both men and women.

According to the Australian Institute of Health and Welfare, 82% of all children released from detention returned to sentenced supervision with 12 months – 59% of which return within 6 months. In addition, 26 per cent of children who go into juvenile detention received five or more supervised sentences before they turned 18.

To add to the cycle further, almost half of all juveniles released from detention will be imprisoned as an adult, according to the Australian Institute of Criminology report from 2007.

IT GETS EVEN MORE COMPLICATED

However, these provisions of the Civil Liability Act 2002 prevent claimants who were in custody at the time of the abuse from obtaining personal injury damages unless the injury resulted in permanent damage of at least 15% – which can be incredibly ambiguous. This determination is often made by an accredited specialist.

Further, if the claimant was abused before 2019, then non-economic loss is capped by what the claimant would have been entitled to receive under the Workers Compensation Act 1987 at the time the injury arose. This means that, depending on when the abuse took place, the claimant could have no entitlement to damages for pure psychiatric injury, even if the claimant meets the 15% permanent impairment threshold.

The report from the Royal Commission into Institutional Responses to Child Sexual Abuse emphasised the prevalence of sexual abuse in youth detention.

“Our inquiry indicated that detention environments may present higher levels of risk of child sexual abuse, as compared to many other institutional contexts,” the report stated.

“[W]e were told in private sessions about the sexual abuse of 515 children in youth detention, 91 of whom told us they were abused after 1990.”

O’Brien Solicitors urges the State of NSW to cease using this legal loophole to avoid paying compensation to victims of child sexual abuse whilst they were in custody.

You can read the full letter below: 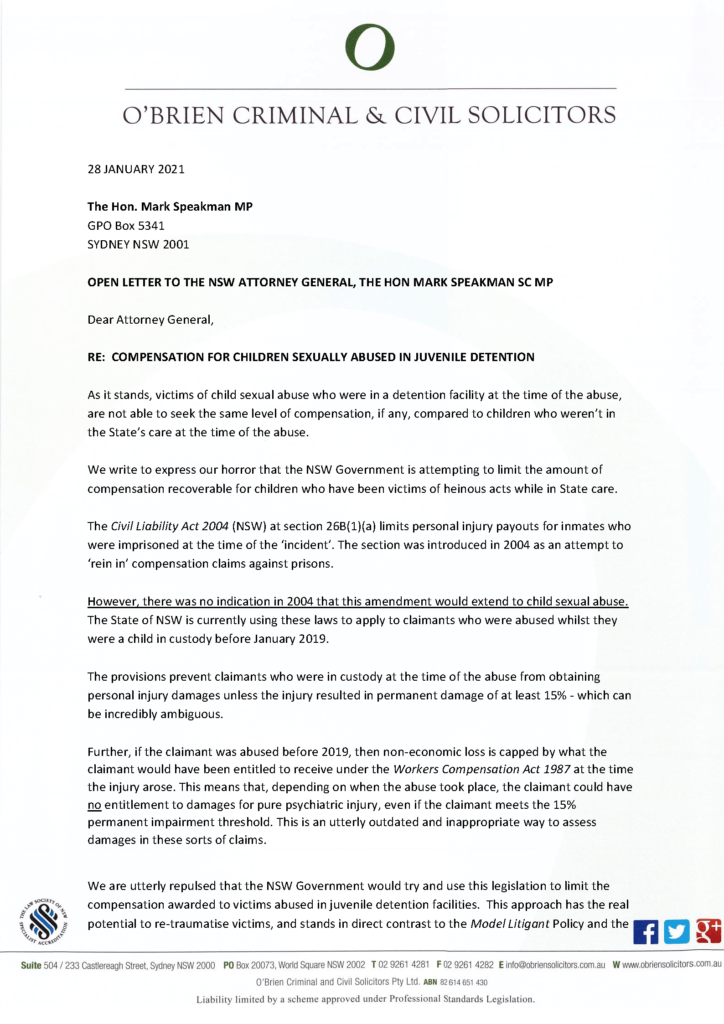 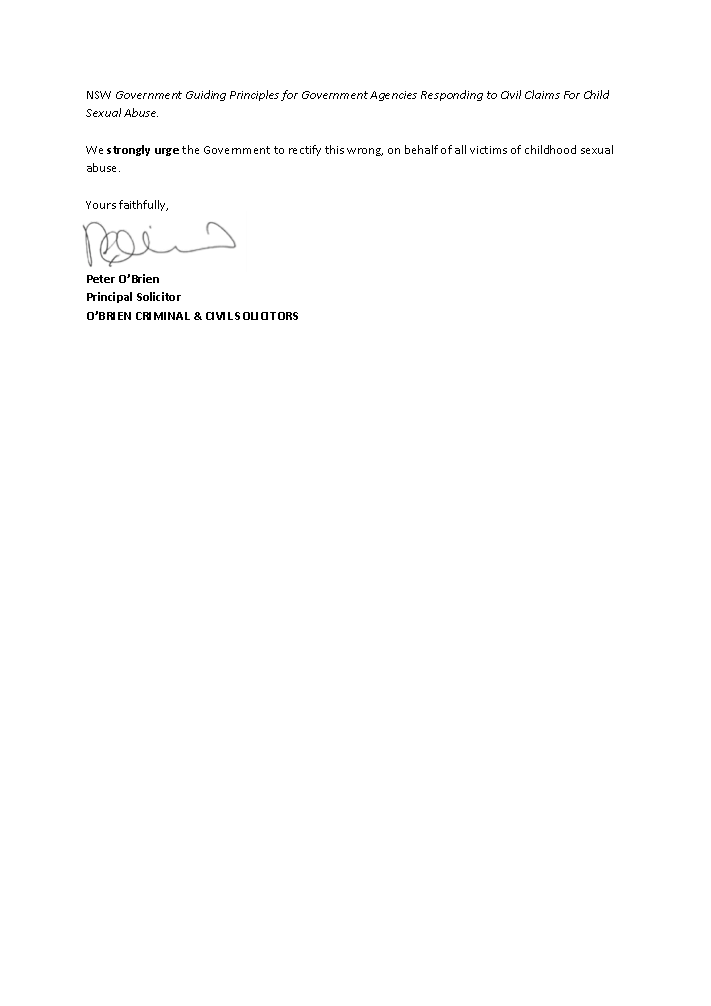