Pill testing is set to be legalised in New Zealand over the summer period with plans to implement the drug harm minimisation policy permanently within the next year.

NZ Health Minister Andrew Little said the government would not legalise possession of substances but would be legalising drug checking services.

“This is not about condoning young New Zealanders’ use of drugs. We would prefer they didn’t,” he said.

“But the evidence is that when allowed to operate, drug checking services can significantly reduce drug harm.

“The Government is committed to minimising drug harm and to treating drugs as a health issue. I make no apology for prioritising young New Zealanders’ safety.”

Pill testing has occurred in New Zealand without a legal framework for some time, however under the new bill approved services will be given exemptions to possession laws.

The Drug and Substance Checking Legislation Bill will automatically expire in 12 months, with a review likely before the law becomes permanent.

The bill has the support of Jacinda Arden‘s Labour Party, alongside left-wing The Greens and the right-wing party, ACT. The only party in opposition is the National Party.

In the first reading, the Green Party spokesperson Chloe Swarbrick took fire at the National Party’s stance on the issue.

She also quoted a character in the movie Mean Girls: “Don’t have sex, because you will get pregnant and you will die”.

“That is, effectively, the same kind of abstinence-based, insane approach that is being advocated for by the National Party, and Simon Bridges stands up and goes, “Why is everybody looking at us like we’re dinosaurs?” said Swarbrick. 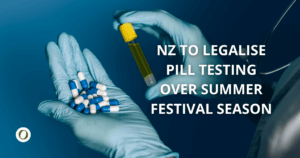