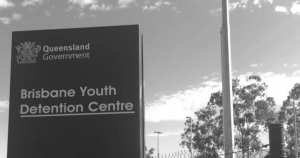 A worker at the Brisbane Youth Detention Centre last week tested positive to coronavirus. The newest case in Queensland is of a relative of the worker.

The supervisor was working at the centre in Wacol in the city’s west when she tested positive. The woman worked five shifts while in the infectious period for the coronavirus.

Authorities state that they have tested almost all of the children and workers and are awaiting results, with genome sequencing underway to detect the origin of the virus.

The exposure of this virus to 127 members of our most vulnerable population is unacceptable. The youngest detainee at Wacol is 13 years old, according to the Queensland Government. While all detainees have tested negative at this stage, they have been locked down. This is a cruel and unacceptable situation for a young person to be placed in.

Sisters Inside CEO Debbie Kilroy is calling for urgent action.

“We’re calling for the release of all of the children. They’re all locked up inside their cells in isolation. Eighty per cent of those children are on remand.”

Questions are being raised in relation to social distancing within the facility. The Government states that they are well-practised in social distancing, however they stated this practice was simply locking the children in their individual rooms.

Isolation will have a large impact on the mental health of the children.

Court hearings for those inside the centre have had to be postponed. Debbie stated that one of the girls they represent will have to remain inside as her hearing was set for Monday.

“We’ve also had to shut down Sisters Inside and my law practice as a precaution,” she stated.

Sixty-fix per cent (65%) of children in youth detention in 2019 were Aboriginal or Torres Strait Islander.

The Royal Australasian College of Physicians (RACP) has previously highlighted that “most children in the youth justice system have significant additional neurodevelopmental delays. These children also have high rates of significant pre-existing trauma.”

The children within these facilities are amongst our country’s most vulnerable. The exposure of these already vulnerable children to this pandemic is an incredibly failure on the part of the QLD Government.

The Government will be testing all staff, any residents and visitors. The centre only starting face to face visits on Monday, however everyone at the centre including staff must have had health checks and temperature checks.

The children should be released from custody as soon as they have tested negative to allow for better social-distancing within the facility.

If you believe that you, or someone you know, are at risk of exposure to COVID-19 while in some sort of detention, please contact us now.