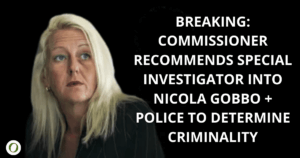 The LAWYER X Royal Commission has recommended that a special investigator should be appointed to determine if barrister-turned-police informer Nicola Gobbo and police officers broke any laws when she acted as a source for the Victoria Police.

Eighty-two witnesses and 129 days of public and private hearings resulted in 111 recommendations.

Commissioner Margaret McMurdo found that the use of Gobbo as an informant was a “systemic failure” with “critical failures of leadership and governance of Victoria Police”.

“It should have been clear to the Victoria Police officers involved that they needed to disclose Ms Gobbo’s status and conduct as a human source,” the commissioner said.

“It was for the court, not Victoria Police, to determine whether this information should be kept from the accused persons.”

Victoria Police told the commission that more than 100 people in the force knew that Gobbo was an informant, and not one raised any concern or reported it.

“The systemic repercussions are still being felt,” she said.

“Court proceedings … have cost many millions of dollars. Public confidence in police has been undermined,” she said.

“It is critical that Victoria Police assures the Victorian Government and the community that it has taken — and will continue to take — steps to prevent past mistakes being repeated,” she said.