When Nathan Reynolds was dying from an asthma attack, the nurse on duty allegedly assumed he was overdosing.

The inquest heard that the nurse then slapped the 36-year-old in the face and aggressively shook him.

Nathan Reynolds died in John Morony Correctional Centre in September 2018, a week before he was due to be released, from an asthma attack. The centre is in Berkshire Park, in Sydney’s Western Suburbs and is now known as the Francis Greenway Correctional Complex.

Jeremy Preo broke down in tears as he recalled the night that Reynolds died, while appearing via video link at the coronial inquest.

The fellow inmate was trained in first aid, and placed Reynolds in the recovery position attempting to open his mouth and airways. “He was alive then. He could hear me,” Preo told the NSW Coroners Court.

When the nurse arrived, Preo informed him that he was still breathing but he had yellow fluid coming out of his airways.

The nurse rolled Reynolds from the recovery position onto his back. “The next thing I remember is her bent over the top of Nathan, slapping him, and shaking him and telling him to wake up,” Preo told the Coroner.

The nurse told a corrections officer that Reynolds was experiencing a drug overdose, which prompted the officer to ask inmates what he had taken.

“How can you say that?… you’ve just watched him have an asthma attack,” Preo replied.

“I believe that she just thought he overdosed on drugs, because he was a criminal, he was in jail, he was a junkie.” 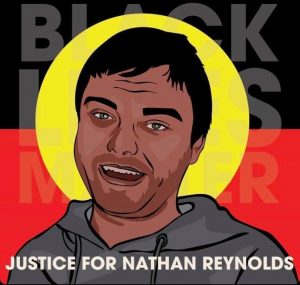 When the nurse arrived, she gave Reynolds Naloxone, the drug administered to counteract the effects of an opioid overdose.

CPR began shortly after the nurse arrived and continued when paramedics showed up about 12.14am.

Thirty minutes later, and 77 minutes after he first radioed prison guards about his breathing difficulties, Reynolds was declared dead.

“Nathan died on the cold floor of a prison, with no loved ones around him. He was just 36 years old – he died far too young,” his sisters Taleah and Makayla Reynolds said in a statement.

Karly Warner, CEO of the Aboriginal Legal Service (NSW/ACT) who is representing the family, said Nathan Reynolds should still be alive today and that accountability for his death and improved practices are critical to preventing future deaths.

“Next year it will be 30 years since the Royal Commission into Aboriginal Deaths in Custody handed down its findings. The Royal Commission was meant to put an end to Black deaths in custody but the Commission’s findings continue to gather dust, and over 440 of us have died in police or prison cells since.”

Next Monday, October 26 hearings begin on the NSW Select Committee on the High Level of First Nations People in Custody and Oversight and Review of Deaths in Custody.

October 26 will also mark the day a decision is handed down in NT courts about whether Constable Zachary Rolfe will face trial for murder for shooting Kumanjayi Walker in Yuendumu in November 2019.