New South Wales is the most lethal place to be an Indigenous person in prison, according to a new report from the Australian Institute of Criminology (AIC).

However, with six Indigenous deaths in custody in 2021 so far, the State has already outnumbered last years data.

New South Wales had 42 deaths in custody, five of which were Indigenous.

The death rate in New South Wales prisons is also the highest since 2001-2 with .23 deaths per 100 prisoners.

By July 2021, New South Wales had already increased the number of Indigenous deaths from the previous year.

On 2 March, a 35-year-old Indigenous man died at Long Bay Prison Hospital, after being found unresponsive in a cell.

In April, a 37-year-old Indigenous man was unresponsive in his cell at Cessnock Correctional Centre, NSW.

On July 8, 43-year-old Ngemba man Frank Coleman was unresponsive in his cell.

Indigenous people are more likely to die in custody as a proportion of the general population, according to the report. 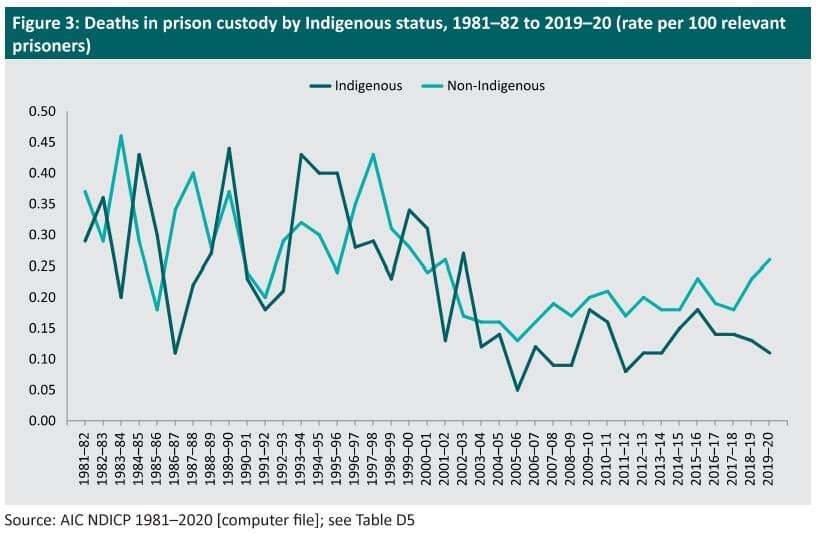 Between 2019 and 2020, Australia marked the equal highest number of deaths in prison custody since 1979-80. The AIC attributed this to the increasing prison population.

Sixteen Indigenous people died in custody between 2019 and 2020.

Notably, between 2018-19 and 2019-20, the number of Indigenous deaths in prison custody decreased by three.

However, three in four of those deaths were due to natural causes.