Firearms and prohibited weapon offences mainly fall under the Firearms Act 1996 (NSW). This act was introduced after the Port Arthur massacre where a man with a gun killed 35 people and wounded 23 in Tasmania in 1996.

The Firearms Act 1996 regulated the unauthorised possession, use, manufacture and supply of firearms.

This factsheet applies to NSW Legislation, however, under the National Firearms Agreement, most legislation is similar. If you have a query about guns in other states, contact us for a free consultation.

Do I have to register my firearm?

Yes! The only people who are exempt from registration are police officers, prison officers and defence force members while acting in their duties.

If you have an antique firearm, you don’t have to register it to possess it, but if you want to use it, it will need to be registered.

When you register your firearm, you will receive a registration certificate.

Do I need a licence to have a firearm?

Yes! You must have a current firearm licence or permit and have a Permit to Acquire a firearm (PTA). You can apply for a PTA through Service NSW.

It is an offence to possess a gun without a firearm licence or permit. Usually, this offence is dealt with in the Local Court, however, a decision can be made to have the matter heard in the District Court.

In the Local Court, the maximum jail time is two years. If the matter proceeds to trial in the District Court, you could face up to 5 years in jail.

If the weapon is a prohibited firearm (including machine guns, sub-machine guns, pump-action shotguns and more), then the maximum penalty can be up to 14 years in prison.

You must not supply, acquire, possess or use a firearm that is not registered.

Under the Act, you must take all reasonable steps to ensure the safekeeping of the firearm and make sure it is not lost or stolen.

The maximum penalty for this is up to 12 months prison, or two years if the weapon is prohibited.

A firearms prohibition order (FPO) is an order made by the NSW Police Commissioner to restrict a person’s ability to possess and use firearms.

Any officer can nominate someone for an FPO including staff within the NSW Firearm Registry.

If the order is applied, it becomes an offence to acquire, possess or use a firearm, parts or ammunition. Breaching the FPO can result in up to 14 years in prison, and can be up to 5 years for handling ammunition alone.

Have you been given an FPO?

The police have really broad powers to detain you, enter your premise or stop and detain any vehicle you’re in control or possession of under s. 74A of the Firearms Act. The police do not require a search warrant if you’ve been given an FPO.

Given the broad powers, it’s important you’re aware of your review rights. After being served with an FPO, you have 28 days to request the NSW Police review the decision. If they refuse to reconsider the decision, you might be eligible to take the matter to the NSW Civil and Administrative Tribunal (NCAT).

However, if you have been convicted of serious drug or dishonesty offences, or you’ve been subject to an AVO, you will not be eligible to have the order reviewed.

These orders last forever, meaning that at any point in your life after an FPO has been served, the police can enter your home, your car or your persons.

Given the broad powers and limited review options you should contact O’Brien Criminal and Civil Solicitors as soon as you are served with an FPO. 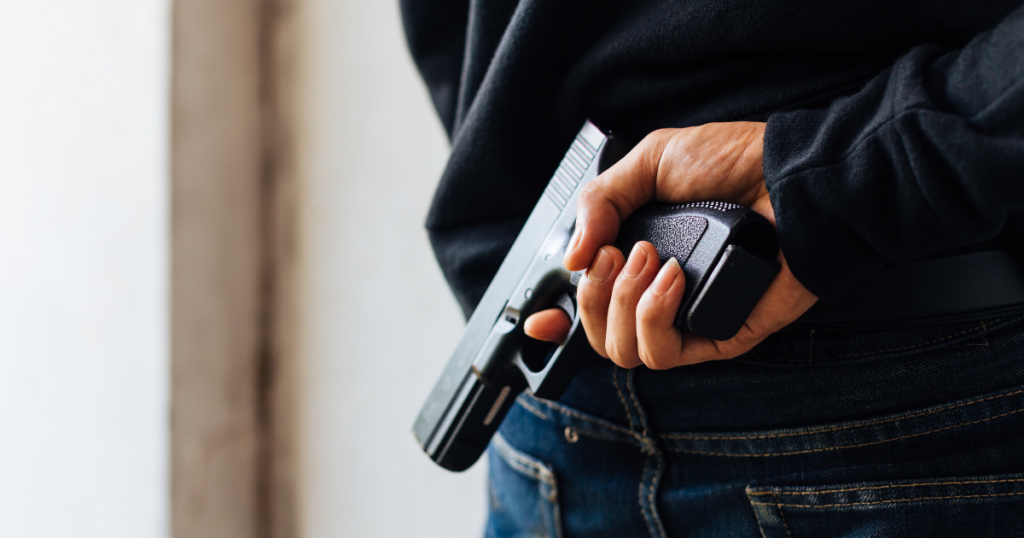 In addition to the Firearms Act, there are firearms offences under the Crimes Act 1900 (NSW).

The penalty for these offences can be up to 25 years in prison, with a standard non-parole period of 9 years.

Use weapon in resist of lawful apprehension (s.33B Crimes Act)

It is an offence to use, attempt to use, threaten to use or even possess an offensive weapon with any of the following states of mind:

The maximum penalty for this is 12 years in jail, or 15 years if committed with another person.

It is an offence to :

All three offences listed above have a maximum penalty of 10 years in prison.

It is an offence to fire a firearm at a house or building with reckless disregard for the safety of any person (s.93GA(1) Crimes Act).

The maximum penalty is 14 years imprisonment.

I’ve been charged with an offence relating to firearms – what should I do?

If you’ve been charged, you should contact O’Brien Criminal & Civil Solicitors immediately to seek legal representation.

Gun offences can carry severe penalties and you deserve dedicated representation regardless of the charges at hand.

JW was charged with possession of an unauthorised pistol (maximum penalty 14 years) under section 7 of the Firearms Act 1996 (NSW). He was on a section 9 good behaviour bond at the time of the offence. He had previously had a suspended sentence imposed in respect of an unrelated matter, which had expired. JW had a history of drug use.

JW wanted to plead guilty to the offence. O’Brien Solicitors had the matter adjourned so that JW could be assessed for the Magistrates Early Referral Into Treatment (MERIT) program, which is for drug users. JW was assessed as suitable for MERIT and successfully completed the program. He then gained admission into a full-time residential rehab.

O’Brien Solicitors successfully argued that a custodial sentence was not appropriate and JW was sentenced to a 9 month suspended sentence.

“I was so lucky not to have been sentenced to imprisonment for that offence. I was scared of going to jail for the first time. My parents are going to be so relieved. Thank you.” – JW

The police executed a search warrant over a semi-rural property containing a group of locked and unlocked caravans. In one of the unlocked caravans, the police found a pistol inside of a bag containing a number of items including fake ID documents with XP’s photograph. The pistol wasn’t registered or licensed to any particular individual.

The police charged XP under the Firearms Act 1996 (NSW) with unauthorised possession of a pistol. Their argument was based on section 4A of the Act. This provides a deeming provision that if a firearm is found in a place that a person owns, leases, occupies or is a place where the person has the care, control or management of, the onus of proof is reversed. As a result, the accused must satisfy the jury on the balance of probabilities that they did not know and could not reasonably have been expected to know the firearm was in the premises.

It was alleged by the police that because XP was in the caravan earlier that day, even if it was only for 45 minutes, therefore he was in occupation of the premises. Consequently, the onus of proof was on him.

At the end of the Crown case, O’Brien Solicitors and Counsel successfully made representations to the Judge for a directed verdict. This was on the basis that the evidence could not prove that XP occupied that caravan under the law.

Significantly, there had been no authority in NSW on what ‘occupation’ was defined as in the context of section 4A. As a result, the defence drew on persuasive authority from Victorian case law on similar legislation to argue that to occupy the premises an accused must have the ability to exclude others from accessing the space.

This meant that just because XP was in the caravan earlier that day, that did not mean he could exclude others from the caravan, and therefore he did not occupy the premises to satisfy section 4A.

The Judge determined that these submissions were correct and applied the law as determined by the Victorian authorities. The Judge directed the jury to enter a verdict that XP was not guilty of the charges by reason that there was no evidence to support an important element of the Crown case as a matter of law. By addition, this case formed new legal ground in NSW for future cases on what ‘occupation’ may mean in the Firearms Act 1996 (NSW).

Possession of prohibited firearm in form of sawn off gun

DJ was travelling in a car with two other men, when police stopped and searched the vehicle. On the backseat of the car, the police located a backpack which DJ indicated was his. Inside the backpack, police found a piece of timber which was a sawn-off part of a firearm. They also found a yellow plastic bag containing a shortened firearm in the vehicle’s engine bay. DJ was arrested and cautioned.

As instructed by DJ, we entered a guilty plea for one count of possess a prohibited firearm and one count of not keep prohibited firearm safely. Due to entering a guilty plea to these charges, additional charges were withdrawn and dismissed. We negotiated with the Prosecution and were able to withdraw allegations that DJ intended to sell the firearm. We also successfully argued a number of sentencing submissions. These included:

NZK was charges with two offences, one relating to the firing of a firearm in a public place and the other relating to an attempted break and enter. NZK plead guilty to the offences, and the case proceeded to a sentencing hearing.

The defence entered comprehensive submissions in relation to NZK’s sentence. The sentencing judge took into account the fact that NZK was already serving a sentence in relation to the offences. The judge also took account of NZK’s impressive presentation during the hearing, and formed a favourable opinion on NZK’s remorse and prospects for rehabilitation.

NZK was sentenced to a relatively short sentence, given the objective seriousness of the offences. The sentence was backdated to take into account the time already served, and NZK will be able to apply for parole in the next few years.

If you have been charged with any firearm-related offences, contact O’Brien Criminal & Civil Solicitors for respectful and dedicated representation.