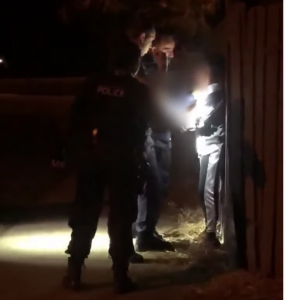 The NSW Police Force continue to display disturbing tendencies with the emergence of footage showing a young boy surrounded by four Sydney police officers while he is held against a fence, pleading with the officers. The obviously distressed child is restrained by male police officers who bark orders at him whilst shining their high-powered torches in his face.

The footage takes an even more brutal turn as a male police officer grabs the child by his neck and repeatedly slams him against the fence, before throwing the child to the ground and pinning him down with his knees pressed into his back.

Police officer tries to stop public from videoing the assault

Bystanders observing and filming the event are then cornered by a female police officer who, clearly seeing the violence of her 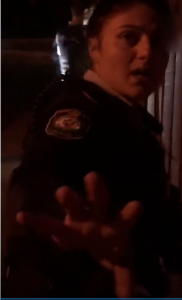 colleagues, apparently attempts to justify these actions and block their view of the ordeal. The officer alleges that the child approached officers holding a knife, yet the male officers are heard referring to the child as carrying scissors. Meanwhile, the child, pinned to the ground by men screams in pain, his face buried in the ground.

It is legal for citizens to film police at work in NSW.

As concerned citizens come forward in an attempt to assist the screaming child, they are threatened with arrest by a male police officer who brandishes a can of capsicum spray. But the bystanders’ response demonstrates real concern for the welfare of this child, in the custody of Police. In that sense, their concern demonstrates the gravity of the situation and the disproportionate use of force, considering the child’s obvious youth, size and vulnerability.

You can see the video here: EDIT – YOUTUBE HAVE REMOVED THE VIDEO. Here is a version we have uploaded to Facebook. EDIT: now the Facebook video has been taken down. It looks like the powers that be don’t want anyone to see it.

Update: he has gotten bail and has been charged for burning a car (NO CHARGES FOR A KNIFE OR SCISSORS)

Latest in a series of police brutality incidents in Sydney

This incident follows several other examples of police brutality in Sydney. Last month, a police officer was filmed throwing an unarmed 17-year-old Aboriginal boy face-first onto concrete pavement in Surry Hills, just a few weeks before a compliant Aboriginal man was tasered in his face in Darlinghurst.

Sydney Police were also filmed using chemical weapons against peaceful protestors in the confines of Central Station. No admissions of failure have been made by the NSW Police.

There is an obvious need for Police to be better trained in dealing with young, vulnerable kids, particularly those, such as this child who may present in manners which are defiant or oppositional – dealing with them in a brutal manner can change their trajectory forever.