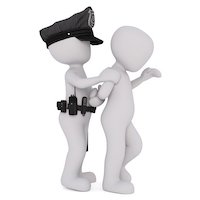 The pair were under arrest for approximately 13 minutes and subsequently got penalty notices for “cross when pedestrian lights not green”.

Jane and Alan commenced proceedings in the NSW District Court. Firstly, for false imprisonment, assault and battery for Alan. Secondly, false imprisonment, assault and trespass to goods for Jane. An Informal Settlement Conference was held with the representative of the State of NSW and negotiated a settlement deal for our clients, which awarded them compensation and covered the costs of their legal representation.