After the continued use of spit hoods on kids in the NT, advocates are pushing for nationwide ban on the barbaric devices. If you wish to support the move to ban spit hoods:

The NT News confirmed today that all states except for Queensland and Northern Territory stopped using spit hoods on children.

However South Australia was the only State to make a legislative ban on the devices.

Email your local MP and tell them to ban spit hoods nationwide.

According to the investigation, police in NSW, Victoria and Tasmania confirmed they never used spit hoods or restraint chairs on children.

It also confirmed spit hoods were no longer in use in any youth detention facility in Australia.

“Torture Devices” used on kids in the NT

NT Police used spit hoods, described by the UN as torture devices, 27 times since 2018 on children as young as 12.

Spit hoods are a mesh fabric hood which is meant to conceal the face and restrain the person. Most often there fixed at the base with a band around the neck.

The hoods are meant to protect corrections workers from spitting or biting. However, there have been many instances of asphyxiation from the hoods. 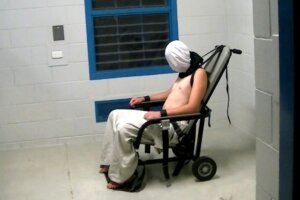 Footage of Dylan Voller strapped to a chair, wearing a spit hood found traction in the consciousness of many Australians.

The Four Corners episode sparked the Royal Commission into the Protection and Detention of Children in the Northern Territory after it revealed Australia’s dirty secret of excessive force in prisons.

“Having heard the evidence around this issue during the NT Royal Commission, I completely agree that the use of spit hoods is inhumane and cruel, especially when used on children,” Mr O’Brien stated

“The Royal Commission recommended that spit hoods be banned. But like most other recommendations, it remains ignored.”

NT Police are silent on move to ban spit hoods

Police Minister Nicole Manison asked NT Police to investigate alternatives on February 24. Since then, they  remain silent on the issue.

However, the NT News contacted police multiple times for comment but only heard back: “the review is continuing. It is an internal review and NT Police won’t be providing comments”.

In February Assistant Commissioner Bruce Porter told the NT News that police use the hoods on children at risk of self-harm.

Port said the options for police was “limited with minimal alternate options for ensuring the safety of both (children) in custody and police officers”.

However, many states successfully banned the devices, or simply never used them.

Victoria, Tasmania leading by example by use of PPE to protect officers

A statement from Victoria Police said spit hoods and restraint chairs were “never … used on any person in custody or otherwise.”

“We use personal protection equipment to keep our staff safe,” the spokesperson stated.

This is “in addition to extensive training to provide police officers with the capability to manage such situations.”

The Victorian Police Union further said their lack of use had “never been raised as an issue by members.”

Tasmania Police told the NT News it does not “use or possess” either devices.

The statement also said for people at risk of self-harm, Tasmanian police protocol was to monitor them every 15 minutes and remove any items that could cause harm, including possibly moving the person to another room.

No safe way to use Spit Hoods

Change the Record co-chair Cheryl Axleby said there was no “safe way” to use spit hoods.

“Evidence that these devices, which have been implicated in the deaths of our people in custody, are being used by police in the Northern Territory and Queensland is deeply disturbing,” she said.

“Right now there is no positive obligation to report use of spit hoods… to an independent authority.”

“[S]o we have very little transparency into how people are being treated when in custody.”

She called on every jurisdiction to follow South Australia’s lead to “legislate a ban on the use of spit hoods in any context, on any one”.

Petition to end use of Spit Hoods 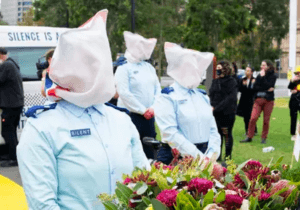 The organisation Ban Spit Hoods Collective launched a national petition calling on all states and Territory’s to legislate against the devices.

“The barbaric images of a child being hooded and tied to a chair were an international shame. The fact that spit hoods continue to be used in prisons and police cells across the country is abhorrent. No one should ever be subjected to this archaic and humiliating device.”

“The use of spit hoods have been synonymous with serious injury and death,” she said on behalf of Jumbunna Institute for Education and Research & The Ban Spithoods Collective.

“The ongoing police use shows us that solely operational bans on spit hoods are not enough. We achieved a state-wide legislated ban on spit hoods for all people, of any age, and in all contexts across South Australia and believe this can and must be replicated in every state and territory. This ban will save lives.”