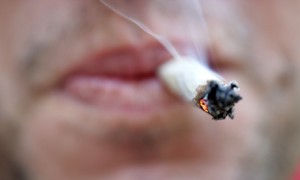 Terminally ill patients will soon be able to use cannabis without fear of being charged in NSW, as the Baird government moves closer to legalising the drug for medical use. This will be a formalization of the use of medical marijuana which is now done in a de facto way.

NSW Premier Mike Baird made the announcement on Tuesday. He said he was moved to act after meeting cancer patient Daniel Haslam, who has been using the drug illegally to relieve his suffering.

Police will have discretion for medical marijuana users

Under the measures, NSW police will be allowed to exercise discretion not to charge terminally ill adults who use cannabis.

Baird said the move formalised what police were already doing.

His announcement came after NSW Labor said it would support a bill to legalise the use of cannabis for medicinal purposes.

Nationals MP Kevin Anderson will soon introduce a private member’s bill to allow terminally ill patients and their carers to legally possess up to 15 grams of cannabis.

Opposition Leader John Robertson said he had great sympathy for the terminally ill and their families, who have advocated for the use of cannabis for pain relief.

“People in this situation should not suffer the further humiliation of being dragged through our courts and treated as criminals,” he said in a statement on Tuesday.

“Labor’s position would see the law change to provide this small group of people with the protections they need.”

Labor will take its policy to next year’s state election if there’s no change before then.

Baird indicated he is open to supporting Anderson’s bill. However, he voiced concerns about the sale and regulation of the drug.

Patient with cancer made an impression on Mike Baird

Baird met Haslam, a 24-year-old who in 2010 got a diagnosis of bowel cancer and doctors gave him only months to live, to discuss the issue of legalisation.

Haslam has been undergoing chemotherapy for the last four years and has been taking cannabis to relieve his symptoms.

His mother Lucy, a retired nurse, and father Lou, a former head of the drug squad in north-west NSW, are now asking politicians to legalise medicinal use of the drug.

The Victorian Health minister, David Davis, said changes to that state’s laws would make it easier for properly regulated trials to take place.

“The Victorian coalition government has listened, particularly to the concerns of parents who believe that some of these products can make a real difference to the health and quality of life of their children,” Davis said on Tuesday.

“We are taking the lead in working with other authorities to ensure clinical trials of some of these cannabis compounds are conducted, while ensuring they are undertaken in a safe and ethical manner.”

The clinical trials legislation was introduced to Victorian parliament on Tuesday.

This medical marijuana article originally appeared in The Guardian Sep 16, 2014