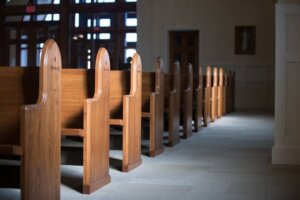 The death of Lismore paedophile priest Father Clarence Anderson has sheltered the Church from new allegations of child sexual abuse. The victim in question, a woman referred to as GLJ, took her case to the Supreme Court of NSW. She argued that the Catholic Church is liable for the traumatic attack she experienced as a 14-year-old girl in her childhood home in 1968.

GLJ purported that the Lismore diocese was responsible for negligence in their duty of care because they had prior knowledge of the previous abuse by Anderson on other children and possibly her own abuse.

Catholic Church had prior knowledge of paedophile priest

Documents presented in court found that the church had knowledge of the abuse by Anderson on young boys four years prior to GLJ’s allegations. They found that instead of removing Anderson from the clergy, the Church moved him through different parishes. In those parishes, he continued to abuse children. Several complaints came from the other parishes.

Various senior members of the Church provided statements with their knowledge of Anderson’s abuse. A parent told a clergy member that “it was common knowledge that other boys had been similarly used” in relation to the abuse. The church has attempted to throw out GLJ’s case twice despite this known history. Their argument was that GLJ had not complained before Anderson’s death in 1996. This meant that they could not carry out an investigation into the veracity of her claims, causing an unfair trial.

In 2021, the church applied for a permanent stay which The Supreme Court of NSW rejected. However, in early June 2022, the Court of Appeal overturned the decision, which granted the permanent stay. The Court ruled that Father Anderson was a critical witness even though he was not the defendant and that his death occurred before the Lismore diocesan trust got notice of the allegations against him. Further, the Court stated that the diocesan trust could not confront Anderson with the allegations from GLJ, nor could it acquire instructions to defend against her claims.

The Royal Commission into the Institutional Response into Child Sexual Abuse led to the reforms that removed the limitation periods for civil claims of this nature. However, the ruling from the Court of Appeal could have considerable consequences for future historical child abuse claims made after the death of their perpetrators. The judgement has already been cited in Smith v The Council of Trinity Grammar School [2022] NSWCA 93. There, the applicant is battling the decision of having his proceedings permanently stayed.

If you suffered institutional child sexual abuse, contact our lawyers today to see if we can help you.