Several countries have banned the wearing of facial coverings in public places. These include: France, Austria, Belgium, Germany, China and Bulgaria. Recently, Sri Lanka joined the burqa ban list in a knee-jerk reaction to the series of suicide attacks that killed at least 250 people and injured hundreds on Easter Sunday. This controversial ban could find its way to Australia if proposed legislation passes.

The proposed law on facial coverings

In 2018, Senator Cory Bernardi introduced the Commonwealth Places and Services (Facial Recognition) Bill 2018 (Cth) into the Senate. The proposed law aims to:

An exception to the offences applies where the wearing of the full-face covering is reasonably necessary, in all the circumstances, for a number of listed purposes. This includes:

It is important to note that a defendant has the evidential burden to prove that this defence applies.

Whilst this defence aims to act as a protection, it is also necessary to consider the possible consequences if the proposed law passes.

There have been numerous articles and reports examining the effects of the French law on women who are subject to the ban.

For example, a report released by the Open Society Justice Initiative revealed the experiences of 35 women in relation to the ban. All respondents in the study reported significantly negative effects on their lives. Those who continue to wear the full-face veil describe the ban as a constraint on their movement. Many felt prevented from leaving their house due to the fear of being stopped by the police or experiencing abuse by the public.

There have been several incidents in recent years involving women being attacked in public and forced to take off their veils. This includes a pregnant Muslim woman, who was allegedly attacked in public for wearing a veil and subsequently suffering a miscarriage.

Many of the respondents to the Open Society Justice Initiative study also reported that the constraint on movement caused by the ban affected their physical and mental health. Some developed anxiety and depression as a result.

Right to freedom of religion

Under article 18 of the Universal Declaration of Human Rights, everyone has the right to freedom of religion which extends to wearing religious articles such as the burqa or niqab. The countries that have already implemented a facial covering ban have been subject to international criticism for the controversial ban due to its effect on religious minorities. With Australia’s serious shortcomings in its human rights record, the passing of such a law would could lead to even further international criticism.

A full-face covering ban in Australia could have adverse effects on women living in Australia who wear the burqa or niqab for religious reasons. Further safeguards need consideration to ensure that such women do not experience abuse by members of their public for simply going about their day-to-day activities. 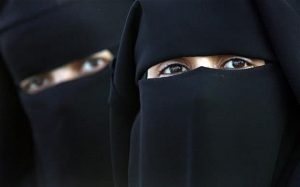