Legislative changes to the NSW Bail Act have commenced today through the enactment of the Bail Amendment Act 2014.

Show Cause – Burden of Proof placed on accused

The Act places an onus on the accused to positively show cause as to why their detention is not justified, effectively creating a general presumption against bail for specified offences. This heavily abrogates the presumption of innocence and liberty that is central to the criminal law and ironically referenced in the preamble to the Act.

There is also no guidance given to courts about the definition or method of determining when someone has ‘shown cause’. The Act simply lists the offences that are designated as ‘show cause’. This lack of direction leaves the door open for arbitrary and potentially draconian decisions.

If a person is found to pose an ‘unacceptable risk’, bail must be refused. However, ‘unacceptable risk’ will be determined without considering the conditions that apply to bail. This applies even if that risk could be neutralized by requirements such as regular reporting at police stations. This heavily restricts the opportunities for successful applications and will certainly increase the number of people incarcerated while awaiting trial. 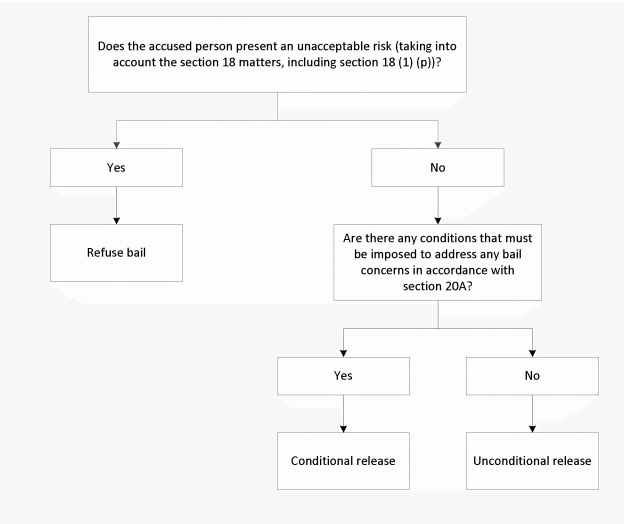 Section 19 (3) further stipulates that successfully showing cause that detention is not justified is irrelevant to the determination of whether there is an unacceptable risk. This creates further uncertainty about how much further applicants must now go to show cause beyond the near exhaustive list of factors provided for determining unacceptable risk.

It also means that certain people may show cause and have risks that can be mitigated by conditions, and still be refused bail.

The Act implicitly draws upon a picture of the accused as a guilty criminal whose liberty can be removed with less justification. Bail exists to protect the judicial process and the community, not as a kind of pre-emptive punishment.

The negatives of incarceration on remand

The value of freedom for those charged with criminal offences cannot be understated. Being incarcerated removes opportunities to care for family members, search for employment, prepare legal defence and minimise the disruption to their life. Jail carries its own contaminating effects, bringing those on remand in contact with gangs and violence while damaging their chances of employment.

Incarceration is also incredibly costly. The average cost of a day of imprisonment for a single prisoner is between $200 and $300. The total cost of running prisons in NSW averages around $2.8 Billion each year, and is rising steadily.

There is no doubt that the changes will have a disproportionate effect on the already marginalised in our society. We can certainly expect to see a greater impact on Aboriginal people, those from non-English speaking backgrounds and people from lower socio-economic backgrounds.

Regardless of the content of the legislation, the timing of the legislative change is also reason for concern. The Bail Act 2013 had been in force for less than six months! These amendments came before any fair consultation with those working with the legislation had been considered, before any properly informed debate, before any real evaluation of the Act had been done. The legislation was amended as a knee jerk reaction to shock jock commentators who have no grounding in the reality of the vicissitudes of daily life in the bail courts of this state. It was done so without rigorous debate and with an apparent hostility toward the liberty and freedom of the individual.

This legislation is clumsy and poorly considered. It is an example of why legislation should not be constructed based on reactionary emotional responses to what people are said to have done or might do, or a quick vote grab in a fickle political environment. Legal and regulatory systems do not always work perfectly. There are always risks that those released on bail might reoffend, of course also that those not on bail will offend. But the reality of this legislation is that the innocent accused is far more likely to be imprisoned and for longer. The pendulum has swung too far from the rights of the individual towards a point closer to arbitrary jailing by the state.

This publication should not replace specific legal advice. If you are in need of assistance in a bail matter or with any criminal matter, contact O’Brien Solicitors on (02) 9261 4282

O’Brien Criminal and Civil Solicitors are located at: