A 36-year-old man has been found not guilty of resisting arrest after police failed to comply with safeguards.

However, the officers failed to tell the man why they arrested him, rendering the charges baseless.

Obliged to arrest, but powers to inform

Judge David Wilson told the Court that the officers had an obligation to arrest Kershaw given the circumstances. However they also had to inform him, as soon as it was reasonably practical, why he was being detained.

“I find beyond reasonable doubt the arrest […] was reasonably necessary to protect the safety or welfare of any person…” Judge Wilson said.

“The sole question for the tribunal of fact is whether […] it was not reasonably practicable for [the male] Sen Con to provide the accused with the reason for the exercise of the power of arrest.” 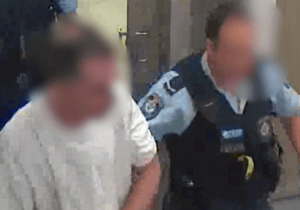 The 36-year-old earlier pleaded guilty to assaulting the arresting officers.

According to The Daily Telegraph, he put a female officer in a headlock before punching her repeatedly in the head. He then struck out at a male officer’s genitalia.

The court heard Kershaw assaulted and intimidated the occupant of the house before officers had arrived. He was in a state of heavy intoxication.

When the officers arrived they found Kershaw kneeling in the front yard. His mother stood over him. She told the officers that he needed to be  in handcuffs.

The court heard the male officer put his hand on Kershaw’s shoulder and went to grab his other arm when Kershaw flew into a violent range.

Crown: “He should have known why he was under arrest”

The Crown submitted that the man should have known why he was under arrest because of the way he carried on earlier and that police had been called, given they arrived in a marked car with flashing lights and sirens.

The legislation which dictates police powers states explicitly that an officer must tell a person the reason for the exercise of the officer’s powers.

Not guilty of resisting arrest

“A police officer who exercises a power to which this Part applies must provide the […] reason for the exercise of the power.”

Judge Wilson found that the officers didn’t comply with this section of LEPRA.

“I find that it was reasonably practicable for [the] Sen Con to provide a reason for the arrest before commencing the act of arrest, this renders the arrest unlawful,” Judge Wilson said.

“It follows the police officers were not acting in the execution of their duties when they were violently assaulted by the accused, accordingly the verdicts in count three and five of the indictment are not guilty.”

If you believe you experienced unlawful arrest, regardless of if police laid charges, contact our lawyers. We can discuss your rights and any compensation you might deserve.