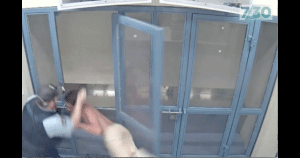 A NSW police officer continued to serve after being charged with assaulting an Indigenous man at Goulburn Police Station in January 2019.

Patrick Little, a then-18-year-old Indigenous man, was arrested for affray and taken to Goulburn Police station before being assaulted by police.

Little is seen to get out of the back of the Police car and walks in line with police orders, when the officer grabs him by the neck and slams his head into the wall.

The officer has since been found guilty of two counts of common assault, and the officer’s employment status is under review.

In footage obtained by ABC’s 7.30, the officer is also seen to tell Little to shut up after locking him in his cell.

Magistrate McGowan cited the seriousness of the offence and the position that Murray was in as a police officer, and handed down a recorded conviction.

Her Honour noted that while Mr Little’s behaviour was irritating, it didn’t warrant the actions taken by Senior Constable Murray.

While his employment is under review by the NSW Police, he remains a serving officer on restricted duties.

CEO of Aboriginal Legal Service NSW/ACT Karly Warner is outraged by this fact.

“I just think it’s outrageous. What does this say about accountability for police misconduct?” she told the ABC.

If you’ve been affected by police actions such as police brutality, contact O’Brien Criminal & Civil Solicitors on 02 9261 4281 or .