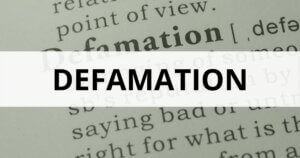 Miss Healy was present on Australia Day 2012 when a number of protestors converged on a restaurant containing the then Prime Minister Julia Gillard and the then opposition leader Tony Abbott. Miss Healy approached the ABC and told them that Mrs Kunoth-Monks had made inflammatory comments that stirred up the trouble including referring to the community of the central Northern Territory as racist.

Justice Mildren observed footage of several speeches made at the Tent Embassy commemoration that day which preceded the protest. Of these speeches, Justice Mildren noted:

The overall impression was that there was still a need for Aboriginal people to fight for equality, justice, better housing and social services, the preservation of Aboriginal culture and identity, and self-determination, and that this was an occasion to remember their past leaders who had fought for change, and the need to ensure that there would be future leaders who could carry on the fight.

Justice Mildren went on to describe Mrs Kunoth-Monks as:

having a national reputation as a highly respected community builder and reformer, a dignified woman with a controlled and respectful style of communication.

Justice Mildren found that Mrs Kunoth-Monks never made any reference to the community of the central Northern Territory as being racist and that any suggestion she did was extremely damaging to her, particularly as she was the Shire President of the area at the time. He then stated that Mrs Kunoth-Monks:

evidence as to the injury to her feelings was poignant and I have no hesitation in accepting it.  She was a very good witness whose sincerity and truthfulness I do not doubt.

Whilst Justice Mildren did find that Miss Healy was doing her best to give truthful and honest evidence he concluded that:

She was plainly a person of limited education and outlook.  She may well be described as excitable, foolish, filled with unreasoning prejudices, prone to exaggeration to make a point, and prone to draw inferences which are unreasonable.

Justice Mildren was also highly critical of the conduct of the ABC, referring specifically to their “inadequate” attempts to verify the accuracy of the information they had been given and their unjustified reliance on Miss Healy as a reliable source. The Judge also noted that the ABC’s efforts to contact Mrs Kunoth-Monks “left a lot to be desired”.

The Court awarded damages of $125,000.00 and $9000 in interest, which in part reflected the ABC’s, and Miss Healy’s, failure to apologise and insistence that they were justified in defending the case.

I feel an enormous sense of vindication and relief. I have always been about bringing people together and not pulling them apart. Having a national story that stated otherwise hurt me deeply. This victory has given me the strength to continue to advocate for treaties so that black and white can live together as two respected peoples.

Mrs Kunoth-Monks lawyer, Stewart O’Connell of O’Brien Solicitors, described it as
A rare and important victory for an oppressed people against ingrained and systemic racism.