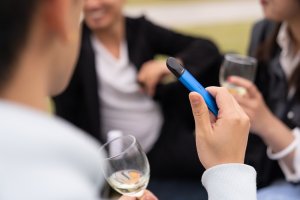 According to Four Corners, the booming black market for vapes is “fuelled by rising demand and a failure to police the rules.”

The Chair of Cancer Council’s Tobacco Issues Committee, Libby Jardine said there was an “epidemic of e-cigarette use among young people”.

Four Corners found multiple illicit sales of vapes on social media with “hundreds of suppliers to choose from across Facebook, Snapchat, Instagram and TikTok.” Many local convenience stores also sell vapes over and under the counter.

What is a Vape?

The National Health and Medical Research Council states that E-cigarettes are: “battery-operated devices that heat a liquid containing chemicals (called ‘e-liquid’) to produce an aerosol that users inhale (a process known as vaping).”

Without a doctor’s prescription, importing, buying or attempting to obtain vapes are illegal under the following legislation:

On the 23rd of June 2022, NHMCR released updated research on E-Cigarettes. The latest advice states:

Demands for action on illegal vapes

Many organisations support the evidence based concerns that the NHMCR raised. 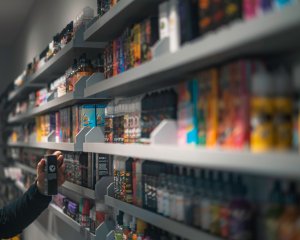 Lung Foundation Australia called for the elimination of e-cigarettes.

The Lung Foundation is urging “each state and territory to ensure that enforcement bodies are coordinated and empowered to take appropriate action locally.”

Further, they advocate for “a launch of the National Tobacco Strategy with clear and strong action” to ban e-cigarettes.

The Cancer Council list out their main calls for action as: