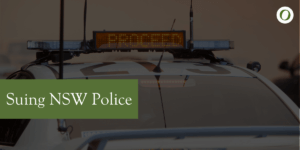 EKM was sleeping in the back seat of his vehicle, next to his teenage son and young niece. An unknown male drove the vehicle. A police patrol vehicle activated its sirens and signalled for EKM’s vehicle to pull over. The police intended to perform a random breath test (RBT) on the driver. Upon bringing the vehicle to a stop, the unknown driver jumped out and ran down a nearby driveway.

Two police officers got out of the patrol car and approached EKM’s vehicle. Police questioned EKM’s niece and son who the driver was, which they were unable to answer. The police then forcibly shook EKM. Confused and disorientated upon being shaken awake, EKM also did not know the identity of the driver.

After a heated argument, police grabbed the front of EKM’s shirt so that his shirt collar was choking him. They then pulled him out of the vehicle and onto the road. A police officer sprayed OC (Oleoresin Capsicum or pepper) spray in EKM’s face. EKM felt immediate pain and burning to his face and eyes. Shortly after, an ambulance was called and treated EKM.

The matter proceeded to a defended hearing at the Local Court. The Magistrate found the police officer did not act in execution of his duty at the time of the alleged assault, and dismissed the charges.

O’Brien Criminal and Civil Solicitors successfully assisted EKM by bringing an action against the State of NSW for assault, battery, false imprisonment and subsequent malicious prosecution.

The State of NSW denied liability for EKM’s claims. However, it agreed to settle the matter. EKM received appropriate compensation.