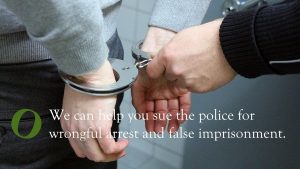 Tash* attended an organised public protest in a park and began marching with the crowd down the road. Tash and her colleague were stopped and approached by officers, who then physically forced the pair into a caged police vehicle.

They sat in the back of the stationary vehicle for approximately 10 minutes and then police drove them to a local police station. After parking at the station, they were left alone in the caged vehicle for up to 10 minutes without explanation.

The pair were escorted separately into the police station and a strip search was conducted without Tash’s consent. During the strip search the cell door was open. She was visible to people coming and going in the corridor. Tash also noticed a camera in the corner of the room. The officers would not respond to her concerns to whether she was being recorded while naked.

Tash had been told she was under arrest for breaching the peace and refusing to follow move on orders. However, police then released her without charge.

O’Brien Criminal and Civil Solicitors started a civil action against the State of NSW for assault, battery and false imprisonment by police. The matter was settled prior to trial and Tash received a favourable outcome.

*Names have been changed to protect the identity of our clients.