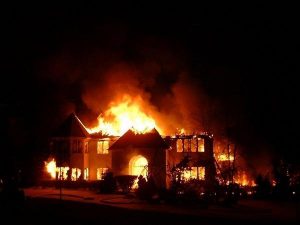 Man accused of burning down his own house by Queensland Police

On a July evening in 2015 Eamonn Coughlan was walking away from his holiday home on Bribie Island in Queensland when an explosion occurred, setting fire to the house causing it to be destroyed.

He escaped this fire on his motorbike and cleaned himself up due to burns he had suffered. After a couple of hours, he went to the nearest police station to report the incident. He was later arrested and charged with arson and attempted insurance fraud despite the fact that he did not smell of petrol, there was very little evidence that he caused the fire and also had no motive to commit fraud.

Accused arsonist and fraudster represents himself at criminal trial

At his trial Mr Coughlan represented himself, even though he was not a lawyer. The prosecution case was largely based on circumstantial evidence, specifically on a test done on his clothes which would detect a drop of petrol in an Olympic sized swimming pool yet which could not establish when the petrol would have got into his clothes.

The prosecution could also not establish what ignited the fire. Also, the chief police investigating officer admitted that he hated Eamonn, according to Eamonn’s barrister, Mark Thomas.

He was found guilty of arson and attempted fraud of his insurance company. The Brisbane man, and former London Metropolitan Police officer, was jailed for three-and-a-half years last July, and the Queensland Court of Appeal denied his attempt to have the decision overturned earlier this year.

Mr Coughlan decided to take his case to the High Court of Australia.

When the High Court looked at this case they said it was “common sense” says that a man would not light his own home on fire, risking injury to himself or even death, especially if he has no motive to commit fraud. The facts militating against motive were:

The trial jury was incorrect to draw an inference of guilt to the criminal standard of beyond a reasonable doubt.

Yet the mystery remains, who or what caused the explosion resulting in the house being destroyed?

Eamonn is now considering his options in suing the Queensland Police Service for malicious prosecution.

This decision from the High Court is similar to the recent George Pell decision as it demonstrates that where the Crown case rests substantially on circumstantial evidence a jury cannot return a guilty verdict unless the Crown has excluded all reasonable hypotheses consistent with innocence. Related to this, and extremely important to defendants, the trial judge can invite defence counsel to state any reasonable hypothesis consistent with innocence that may be put to the jury in the summing up.