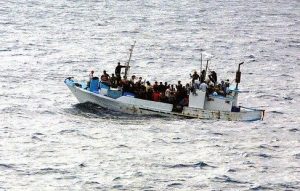 MJ was holding one end of a large banner with her husband, relating to the Refugee Action Coalition.

Police allege that MJ was obstructing pedestrian traffic on the footpath. MJ was approached by a Police Inspector, who requested that she move her banner away from the footpath. MJ and her husband moved from the footpath to the bottom of entry stairs for the Australian Broadcasting Corporation‘s offices in Ultimo in Sydney‘s inner city. ABC Security informed them they were blocking a fire exit and the Inspector formally directed them to move way.

Police alleged that MJ refused, lunged towards the Inspector and struck the right side of his face with her left arm. Further police then assisted with moving her away and attempted to place her under arrest. They then placed MJ under arrest  and later conveyed her to Day Street Police Station. Upon arrival, they alleged that MJ used her body weight to resist police.Police issued her with directions to comply, but she refused. They laid charges against MJ of

Not guilty on all charges thanks to Police Body Worn Video

O’Brien Criminal and Civil Solicitors successfully represented MJ at the Downing Centre Local Court. As instructed by MJ we pleaded not guilty to all 3 sequences.

As the incident was on record on Police Body Worn Video, we obtained a transcript of this and successfully raised doubt. We also obtained a number of character references, which supported MJ’s good character. Consequently, MJ was found not guilty of all 3 charges.