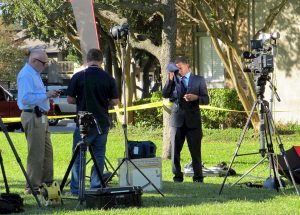 These stories were available on a variety of platforms, including television, social media and online news sites.

The stories falsely suggested that BPS was a criminal. Therefore, they were defamatory. He had concern about the effect of the stories on his future career and his young children.

Our defamation lawyers negotiate a settlement with the publishers

BPS successfully resolved his claims on the basis of confidential settlement. Based on this settlement, he received compensation from the multiple news publishers for the harm suffered. They removed the defamatory material from circulation. Multiple organisations issued apologies to BPS and his family for any embarrassment and distress caused.

Ensuring no blemish remained to his name, the apologies articulated that the outlets had used the commercial footage incorrectly. They also made clear that BPS had no involvement in any way in QTX’s arrest.

O’Brien Criminal and Civil Solicitors are able to pursue your possible claim anywhere in Australia. Please don’t hesitate to contact us today on 02 9261 4281 or by email at . You will get a free of charge, no obligation discussion with our senior defamation lawyer.