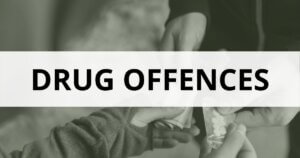 Police had been patrolling a public area in the course of a general drug detection exercise using police dogs.

During the patrol, one of the drug detection dogs approached T and indicated to police that he may be in possession of a prohibited drug, following which 0.7grams of the drug Ketamine was found in T’s wallet.

On the advice of his drug offence lawyer, T plead guilty to being in possession of a prohibited drug per s 10(1) of the Drug Misuse and Trafficking Act.

The local court Magistrate placed T under a s 10(b) good behavior bond for a period of 2 years. The Magistrate accepted that in T’s circumstances, given the small quantity of prohibited drug and his otherwise unblemished criminal record and a number of excellent testimonials, that imposing a conviction would be unnecessary.